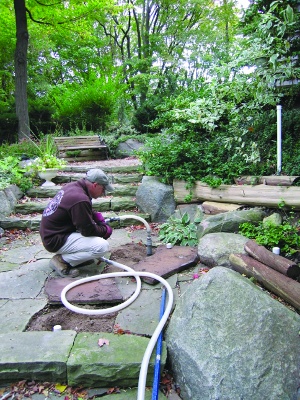 Groundwater is one of Canada’s most important resources—approximately 30 per cent of the population relies on it for domestic use, and Environment Canada estimates that it makes up almost the entire volume of the Earth’s usable freshwater.

However groundwater’s purity is often compromised by contaminants such as household chemicals, pharmaceuticals, pesticides, fertilizers and petroleum hydrocarbons. When, for example, the petroleum hydrocarbons in gasoline move through porous media (such as soil), they leave behind a contaminating trail. When the gasoline permeates the unsaturated zone—the area below ground surface and above groundwater—molecular attractions between soil and hydrocarbons suck hydrocarbon molecules into the interstitial spaces between soil particles. The remaining uncaptured gasoline can flow into the groundwater, which may dissolve and widely disperse it. As little as one litre of gasoline can contaminate one million litres of groundwater.

Kristin Hanson, the senior hydrogeologist at the Toronto office of SNC-Lavalin Environment Inc. and an elected councillor-at-large with the Association of Professional Geoscientists of Ontario, recognizes that groundwater contamination is a growing concern. “We can contaminate groundwater at a faster rate than we can clean it up,” says Hanson. Luckily, in response to our contaminating practices, several options are available to protect groundwater from environmental contamination and treat water that has already been contaminated.

Among these innovative solutions are advanced bioremediation technologies. Bioremediation is a natural process whereby bacteria consume and break down contaminants, such as the hydrocarbons in gasoline, and return the environment to its natural condition. These bacteria are indigenous to soil and groundwater. Alternatively, bacteria that have been approved by Environment Canada can be added to augment the naturally-occurring population.

When bringing the levels of toxicity in groundwater down through bioremediation, bacteria also need food and an abundance of living space in order to sustain rapid reproduction and metabolic activity. As bacteria consume and break down contaminants and lower the levels of toxicity in water and groundwater, they deplete their own energy supply. Over generations of bacteria, their living spaces become cramped and energy supplies become scarce and inaccessible. But technologies that disperse hydrocarbons among bacteria can stimulate the bioremediation process. For example, Hydrocarbon EM (HEM) is an aqueous bioremediation technology that emulsifies hydrocarbons, suspends them in a colloidal film and provides additional energy supplies. This suspension creates living and feeding spaces for bacteria. Additionally, HEM breaks up the oily sheen on the surface of a water table, making the petroleum hydrocarbons available as food for bacteria. These types of bacteria-supporting technologies assist complete and continuous bioremediation in both groundwater and in unsaturated zones.

Adding the appropriate bioremediation technology to above-ground waste streams and lagoons can stimulate bacteria and help them respond and adapt to contaminants and changing levels of toxicity. In addition, a well system filled with an aqueous technology can be inserted into the ground’s unsaturated zone. The bioremediation solution within the wells seeps out and into surrounding soils. These well systems create a biowall that intersects the flow of contaminants prior to their flow into the groundwater. As the contaminants pass through the wells and surrounding soil, they can be metabolized and eliminated prior to reaching the watertable. A biowall placed upstream in the saturated zone can also prevent contaminated groundwater from moving onto an adjacent property and thereby stop the spread of contamination.

Notwithstanding the effectiveness of bioremediation to prevent and clean up contamination, there is no one solution for every contaminant, site or client. It’s critical to determine on a site-by-site bases which technology will be most economically efficient, effective and environmentally sustainable. Tamara Farber, an environmental law specialist at Miller Thomson LLP, cautions that groundwater remediation can represent the highest percentage of costs in remediating spills.

The federal government has emphasized the importance of addressing environmental contamination and has recognized the use of bioremediation and other remedial solutions. At this February’s Innovative Remediation Solutions Workshop (organized by the Ontario Centre for Environmental Technology Advancement), Environment Canada and Public Works & Government Services Canada cited the use of bioremediation in 32 per cent of Federal Contaminated Sites Action Plan-funded projects that were undergoing active remediation in 2007, second only to conventional dig-and-dump methods (used in 44 per cent of projects of the same subset). As private and public stakeholders seek means to cleanup and protect the environment and groundwater, they’re recognizing bioremediation as a potential solution.

But with respect to selecting a technology, Farber says, “What may be a reasonable approach in one case may not be in another, depending upon the subsurface conditions, bedrock fractures, surface water outlets, et cetera. It’s important to understand the technical side so that you can advise clients appropriately, and that includes understanding not only what the benefits of a bioremedial solution can be, but whether they’ve been used in similar subsurface conditions, or whether they have any harmful or lingering effects that can create new problems down the road.”

Kevin Sharfe is the president of Clean Earth Solutions Ltd., working on environmental bioremediation projects with both private and public sectors.