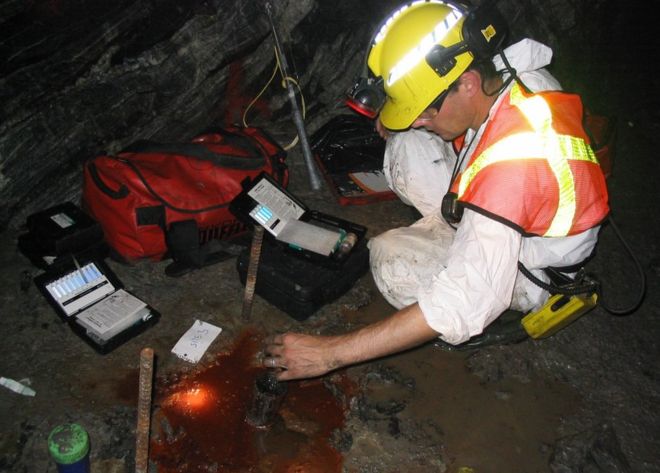 Scientists, led by the University of Toronto’s Barbara Sherwood Lollar, have discovered the world’s oldest water.

The two-billion-year-old water is found at Kidd Creek Mine in Timmins, Ontario, three kilometres below the surface. In 2013, scientists found water that was one and a half billion years old in the same mine. Commenting to the BBC, Lollar said, “[The 2013 find] really pushed back our understanding of how old flowing water could be and so it really drove us to explore further.”

Presenting at the American Geophysical Union’s fall 2016 meeting, the researchers presented their findings, New Frontiers for Deep Fluids and Geobiology Research in the World’s Oldest Rocks. Finding the ancient water system is significant as it allows for the “discovery of new environmental systems that facilitate investigation of biodiversity, microbial metabolism, life’s adaptation to extreme conditions, and limits to life.” Further, the presentations states that the discovery of the water and its microbial systems offer an improved “conception of Earth’s habitability and informed search strategies for life elsewhere in the solar system.”

The recent findings have yet to be peer-reviewed. But a paper published in October on the 2013 discovery concluded that, “long-standing recycling of ancient sulfur in billion-year-old rocks supports unique ecosystems in terrestrial deep subsurface and sheds insights into search for life on Mars.” Of specific interest, researchers found that dissolved sulfate displayed a unique isotopic signature, which is thought to have been produced in Earth’s atmosphere more than two billion years ago.

Long Li, a researcher from the University of Alberta, said of the findings, “The sulfate in this ancient water is not modern sulfate from surface water flowing down. What we’ve found is that the sulfate, like the hydrogen, is actually produced in place by reaction between the water and rock. What this means is that the reaction will occur naturally and can persist for as long as the water and rock are in contact, potentially billions of years.”

The paper describing the subsurface sulfur findings was published in Nature Communications.