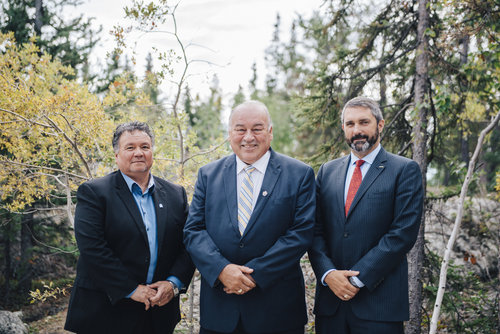 The premiers of Canada’s three northern territories met in Yellowknife last week to discuss sustainable development in Canada’s north, including the balance of environmental conservation, particularly in the face of climate change, and economic development.

Also discussed at length was the need for Indigenous cooperation and the premiers’ support for reconciliation and partnership. The premiers believe that modern land claim and self-government agreements are examples of positive change.

The premiers reiterated their commitment to working with federal and provincial governments, Indigenous peoples, and other partners on implementing the Pan-Canadian Framework on Clean Growth and Climate change to ensure long-term resilience and adaptation in the North.A key commitment under the framework is the development of a Northern Adaptation Strategy.

The representatives also noted their appreciation for federal climate and green infrastructure funding announcements, but they called on the federal government to provide clarity with regards to how funding will be applied in the territories. Canada’s north requires additional capital and resources to address the territories’ infrastructure gap, including significant investment in better climate monitoring, resilient infrastructure, and clean energy.

Carbon pricing should be a valuable tool in reducing emissions and providing incentives to green energy alternatives, said the premiers. However, they stated that in most of the North alternatives are limited or non-existent. Special accommodations should be made for northern regions to address this and that a carbon tax must be designed in a way that does not negatively impact northern costs of living, undermine food security, or threaten emerging economies.

As the North grapples with the effects of climate change, key infrastructure investments will help to address the immediate and ongoing need to adapt to changes in the environment and landscape.

As such, the premiers are seeking northern representation on the Canada Infrastructure Bank board of directors to ensure northern realities are understood. Given the small populations and vast distances in the North, the federal government is an essential and valued partner in infrastructure investments. But, the premiers urge federal programs to take into consideration the unique conditions of Northern Canada when it comes to major infrastructure projects.

The premiers spoke about the strengths of delivering services in an integrated, non-reserve system and the need to better communicate with other governments and Canadians. They noted that it’s important that Indigenous groups are supported and funded to make positive change and emphasized the need for this to be done without fragmenting existing budgets or levels of services to Indigenous northerners.

On August 24th, Moody’s Investors Service released a report stating that Indigenous involvement in large Canadian infrastructure projects is set to increase. “The nature of Indigenous involvement in Canadian infrastructure projects has evolved over the past several years, with communities taking on a wider range of roles,” said Catherine Deluz, a senior vice president at Moody’s and the lead author of the report.

The report noted that many Indigenous communities view economic development as a path to self-sufficiency for their populations, and growing business acumen will likely bring greater involvement in larger projects. Further, increased involvement is also driven by significant water, electricity, and transportation infrastructure needs.

The premiers declared support Indigenous self-determination and reinforced the need for territorial governments and Indigenous governments and organizations to be engaged in any federal planning processes that could affect the delivery of programs and services to northern residents.

For more on the premiers’ conclusions on Indigenous relations, resource development, and Arctic policy, visit http://www.gov.nt.ca/newsroom/news/territorial-premiers-discuss-plans-create-strong-sustainable-north.