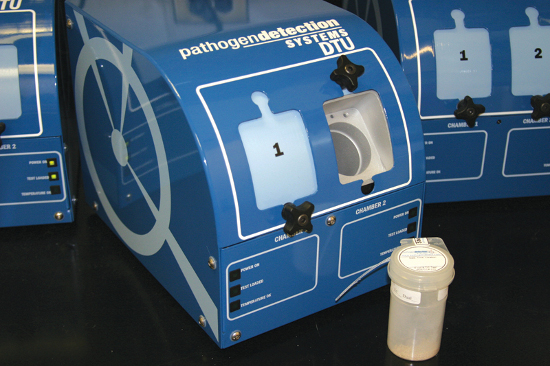 Representatives of PDS and its parent company, Veolia Water Solutions & Technologies (VWS) of Paris, France, joined government officials and co-hosts PARTEQ and the Kingston Economic Development Corporation, in celebrating the transformation of PDS from a university-driven technology transfer initiative into an international, multi-faceted partnership.

The expansion of PDS is centred on a three-year, $8.7-million development project for its next generation of water monitoring systems. The project will receive up to $2.4 million from Sustainable Development Technology Canada (SDTC).

The technology is based on a novel fibre optic sensory technology developed by Dr. Stephen Brown and a team of scientists at Queen’s University, and industry researchers. The patented PDS system provides laboratory-grade testing for E.coli and other coliform bacteria with improved speed, reliability and productivity over current methods.

PDS has already expanded physically, from a single lab to an integrated suite of labs and administrative space in the on-campus arm of Queen’s Innovation Park. PDS will also grow its research partnership with Queen’s University. In the last five years PDS has invested approximately $1 million in direct research and development contracts with Queen’s. Over the next three years the total R&D activity with Queen’s is planned to increase to more than $2.3 million.

New employment opportunities will also arise as the company increases from two full-time employees and three full-time Queen’s researchers to a planned total of 20 people by the end of 2009.

In a further collaboration, PARTEQ’s GreenCentre Canada, a national Centre of Excellence for Green Chemistry Commercialization and Research, also announced that VWS would join GreenCentre as an industrial partner.

Read more about PDS in “Managing the Ultimate Asset” from our November/Decemeber 2009 issue.