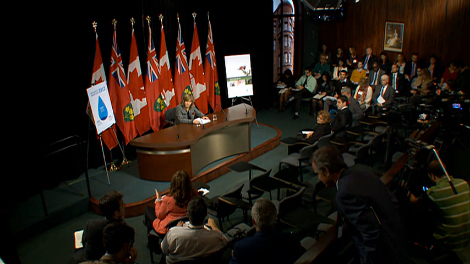 Today, Ellen Schwartzel, acting environmental commissioner of Ontario, released the Commission’s Annual Report for 2014-2015 entitled, “Small Things Matter.” In it, the commissioner recommended that the province move towards a full-cost accounting approach to water takings, that includes all water users.

“Huge amount of surface water and groundwater are taken through the provincial permitting process, yet many industries pay nothing for this water,” said Schwartzel at a press conference at Queen’s Park. “They pay nothing, but the water taken is not without cost. The Ontario government spends over $16 million per year on water quantity management.”

The report noted that the government charges certain industrial and commercial water users that take more than 50,000 litres of water on any day $3.71 for every million litres of water used. The charge recovers less than one-third of costs attributed to these users. Such users include bottled water producers and beverage manufacturers, fruit and vegetable canning facilities, concrete manufacturers, among others.

“Both our office and the 2012 Drummond Report have urged the province to move towards full-cost pricing for water, because it will encourage water users to conserve. We also know that the province ought to do a lot more on water stewardship—considerably more than current tight budgets allow. So a second argument for water charges is that we need to strengthen resourcing for water management,” she said.

“The MOECC and other ministries have the responsibility to watch water quantity they are under very tight budget restraints. In order to do a better job, we need to start charging something that reflects the true cost of water,” she said.

In addition to water pricing, the 2014-2015 Annual Report also included recommendations pertaining to:

The report commended the province’s involvement in the operations of the Experimental Lakes Area and introduction of two new regulations to support those efforts.