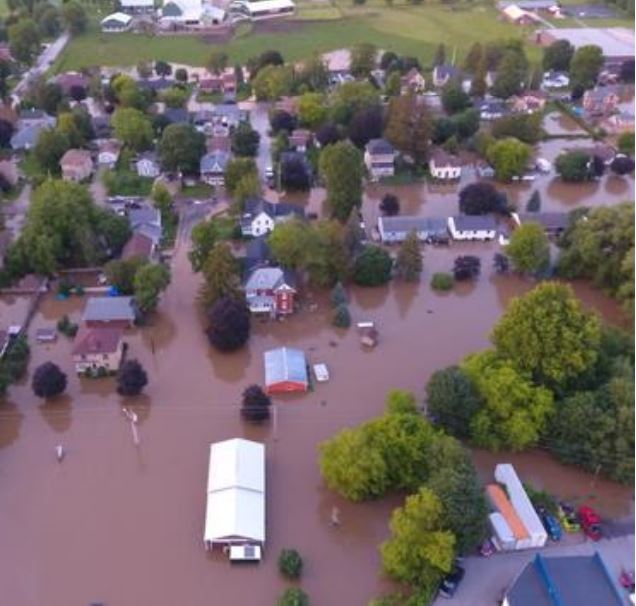 The Town of Minto, Ontario, population 8,300, experienced a significant rainfall event during the early morning hours of June 23, 2017. The rainfall resulted in widespread flooding throughout the Town of Harriston. A declaration of an emergency was made by Mayor Bridge at 10:04 hours on June 23 which lasted for 6 days.

Flood forecasting data from the Maitland Valley Conservation Authority (MVCA) showed that the North Maitland River watershed received precipitation amounts of 110 to 170 millimetres over a 6 to 8-hour period early Friday morning. Approximately 168 properties were reported to be damaged, current damage estimates are between $5 to 15 million. Over 21 sections of various municipal roads were closed throughout the event, including 3 of the 4 main points of ingress and egress to Harriston.

A report to the Town of Minto delivered by Linda Dickson, community emergency management coordinator at the County of Wellington, outlines successful flood response measures, what needs to be learned from the event, and recommendations.

Among the successful measures: drone imagery that provided valuable documentation of the event; city staff responses, including online damage reports, management of community concerns and inquiries; public works dash cams; a new rain gauge system installed in headwaters after flooding in 2008; the Elora Street conduit, which didn’t flood and permitted traffic flow throughout the event; river flood response preparedness based on prior training and exercises; and a food response exercise conducted by the Water and Waste Water Departments in May, 2017.

An important recommendation in managing flood events at the watershed level is that a Watershed Master Plan be developed that accounts for control and retention of flows. In order to have sufficiently detailed information, new aerial photography of the watershed was recommended. As well, the report suggests that the town apply to the National Disaster Mitigation Program to support updated flood mapping.