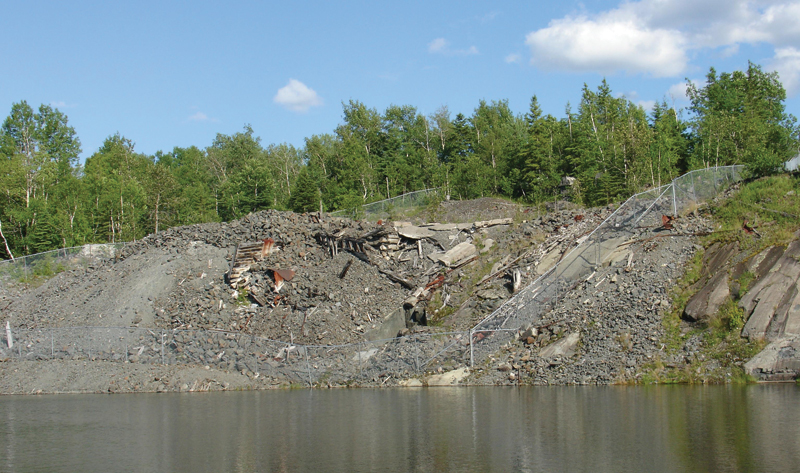 Growing up near Elliot Lake, Ontario, Lorraine Rekmans remembers picking berries near Elliot Lake. A band member of Serpent River First Nation, Rekman’s maternal grandparents lived on the reserve and hunted, trapped, fished, and gathered much of the food they ate. Then, in the 1950s, a few years before Rekmans was born, the first uranium mines opened. A couple of decades and close to a dozen mines later (all of which have since closed), their traditional way of life is on the wane, the land and water around them seemingly altered forever.

Serpent River isn’t unique in this regard. Mining has left an enormous footprint the world over, razing enormous tracts of forest, scarring mountaintops, and contaminating entire watersheds. One needn’t dig too far back to prospect for horror stories. Acid mine drainage from the Britannia Beach copper mine north of Vancouver, which closed in the mid-1970s, left portions of Howe Sound virtually lifeless. In Colorado, aquatic life along a 20-kilometre stretch of the Alamosa River paid the ultimate price after cyanide from the Summitville gold mine leached in the late 1980s. Both disasters cost millions to remediate—$15.5 million for a lime-based water treatment plant at Britannia Beach, and $170 million to mop up after Summitville.

Nowadays, thanks to rising environmental awareness, companies are beginning to adopt the notion of corporate social responsibility, where profits and responsibility go hand in hand. Even the mining industry, long and widely castigated as one of the most polluting sectors, acknowledges that it needs to improve on old practices if it hopes to be sustainable in future years. At its annual convention this past March, the Prospectors and Developers Association of Canada devoted entire professional development streams to environmental stewardship, consultation with local stakeholders, and ethical business practices. Judging from some of the technical sessions and displays, mining companies are trying all kinds of new technologies in hopes of greening their operations.

Uranium tailings were already piling up, uncovered, when Rekmans was born in the early 1960s, yet she remembers the area’s pristine beauty. Her grandfather hunted bear, moose, and deer, and her grandmother occasionally caught rabbits and other small game. “I remember walking with my grandmother on the reserve,” Rekmans recalls. “She had a spring in her backyard, and we went with a pail to fetch water. We had no concerns about eating anything from the land.”

In fact, the land and water were already changing dramatically, though it wasn’t until the early 1980s that the Atomic Energy Control Board, the regulator at the time, issued an advisory to limit the intake of wild berries and game. Tailings were blowing around and the dust was settling on the vegetation. Rekmans recalls that band members were growing concerned about tailings and other waste in local waterways. To make matters worse, the reserve didn’t receive water treatment facilities until long after neighbouring non-aboriginal communities had them, and the federal government and industry chose reserve land for a sulphuric acid plant to process the uranium. Rekmans says her community seemed to experience increased cancer and respiratory ailments, yet she’s unaware of any health or epidemiological studies assessing the impacts on people living nearby, so hard numbers are unavailable.

Restoring the watershed
In recent years, former uranium operators in the area have undertaken reclamation efforts. One company, Denison Mines Inc., established a division, Denison Environmental Services (DES), to oversee work at sites such as those at Elliot Lake. DES manager Ian Ludgate says the company has worked hard to restore the watershed through efforts that include submerging acid-generating tailings under water, containing tailings within bedrock-lined valleys and low-permeability engineered dams, and building treatment systems that dispense lime and other alkaline materials to neutralize water for eventual release.

“The reality is the watershed downstream of the mines has recovered in a significant way,” Ludgate says, adding that his company provides water quality results to the Canadian Nuclear Safety Commission (CNSC) on a regular basis and posts environmental effects monitoring data and other information on its own website. Ludgate adds that multiple provincial and federal government agencies, including the CNSC and the provincial and federal environment ministries, monitor and regulate decommissioning and ongoing water treatment, and mining companies must now provide financial assurance to guarantee a predetermined amount of money is available for decommissioning-related work should the company fail or otherwise find itself in financial trouble. In fact, Ludgate says, DES has managed to finance its reclamation activities by offering services to other mining companies and to governments. “We’re earning enough that we’re able to use the profits to help pay for the costs of the ongoing maintenance.”

While Elliot Lake represents uranium’s past in Canada, higher-grade deposits in Saskatchewan represent its future. The province has old legacy sites—the federal and provincial governments are spending close to $48 million to clean up nearly 40 old uranium facilities in northern Saskatchewan. But, even as that work proceeds, uranium mining and processing remain economic drivers. Cameco Corporation, one of the world’s largest uranium producers, operates two active mines and two mills in the province and is developing a third mine at Cigar Lake.

Cameco spokesperson Gord Struthers says the mine and mill at its Rabbit Lake site and the mill at Key Lake house tailings and other waste rock in mined-out pits, with assorted liners and covers such as water or a mix of sand and crushed rock containing the waste. Struthers adds that Cameco has decommissioning plans for when its mines close, with reclamation already underway in mined-out sections. Plans, which are subject to CNSC approval, include consolidating tailings into a solid mass inside the pits and topping them with contoured caps of fill and vegetation to contain the waste, control runoff water and prevent erosion. “Each facility is engineered for its specific geologic settings,” Struthers explains.

Struthers concurs that social and regulatory expectations have changed. “The people I’ve talked to indicate that, at the time, they felt they were meeting the current expectations,” he says. “Increasingly, companies are recognizing that using environmentally-sound operations and cleaning up after yourself is sound business now, that there really isn’t any alternative.”

While Ludgate and Struthers express confidence in the measures their companies are using to treat uranium tailings and waste, new technologies and adapted versions of existing ones are coming to the fore. Toronto-based BacTech Environmental Corporation, for instance, is using bioleaching to treat waste from closed mines and has landed its first customer—the Manitoba government, which is looking to clean up old arsenic-laden tailings left over from a gold mine at Snow Lake that closed 50 years ago.

Bioleaching, where living organisms extract specific metals from their ores, has been used as a more environmentally-sound alternative to smelting for recovering metals such as gold, silver, copper and nickel, says Oscar Alvarado, a project research analyst with BacTech. Now, the company is adapting the technology to treat legacy waste. “It’s only recently that the technology has been applied to tailings remediation,” Alvarado explains. “Arsenic is one of many harmful elements that happen to occur around certain types of ores and metals, and bioleaching is very good at stabilizing arsenic so that it’s no longer able to contaminate.” BacTech actually expects to recover enough gold from Snow Lake tailings to earn a profit without charging the Manitoba government, and the company is using this same business model, where it retains rights to metals extracted from waste it treats, to attract other customers. However, BacTech has not applied bioleaching to uranium, and while Alvarado believes it should “in theory” work with the radioactive metal, tests have not been done, to his knowledge.

Now living near Ottawa, where she serves as aboriginal affairs critic with the Green Party of Canada, Lorraine Rekmans is following developments in Elliot Lake and Serpent River with a keen eye. She says she would like to see more effort put into research and development of new technologies to help fix old legacy sites. On the other hand, past experiences with government and industry have left her less than confident in current promises and commitments. “The tailings will be managed in-situ,” she explains. “But that waste is being held back by dams, and those dams have to be maintained forever. So the waste is there—you can’t actually clean it up. The lakes have been decimated. It’s done.”  WC

Saul Chernos is a freelance writer based in Toronto.