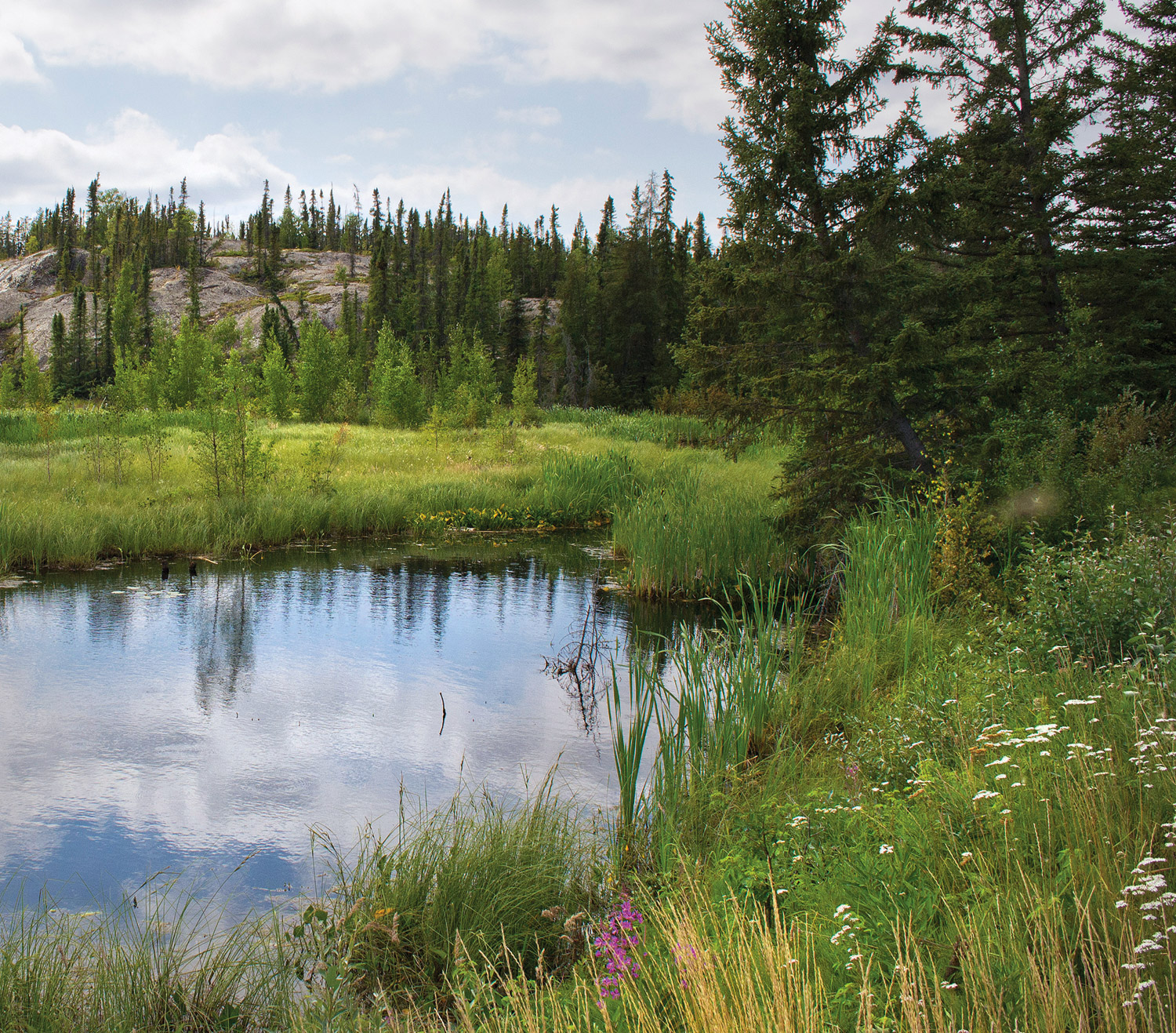 This July, Paul Betsina spent five days in a helicopter over boreal wetlands, flying so low he thought he could “reach out and grab the treetops.” After six-hour days scanning the terrain, battling motion sickness and recording data on a worksheet in close quarters, Betsina’s tired. He’s happy to be back in Yellowknife.

Betsina, from the Yellowknives Dene First Nation, was part of a field crew surveying and mapping boreal wetlands in Akaitcho Néné, home to four Dene First Nations. The land ranges from alkaline flats in the south to lakes, rock and spruce before transitioning to the treeless tundra.

Betsina is proud of the pilot project that marries his—and his people’s—knowledge of the land with science. When complete, it will help his community make informed decisions about the land. And there’s a lot of ground to cover: approximately 77 million acres (31 million hectares).

Mapping for the future
This year, DUC signed a Memorandum of Understanding (MOU) with the Akaitcho Treaty 8 Tribal Corporation, which helps support the wetland mapping project.

“We’re excited to work directly with the Akaitcho under this collaborative partnership,” says Smith.

DUC and its partners selected the southeastern region of the Northwest Territories because of its significance to waterfowl and other migratory birds, and also because of imminent land-use planning initiatives. Although satellite maps exist of the area, there’s still key knowledge gaps about the diversity, density and types of wetlands here.

There are three phases to the wetlands mapping project. Crews of DUC staff, DUC-trained First Nations technicians like Paul Betsina, and Indigenous Guardians collected data from aerial fly-overs this summer in certain parts of Akaitcho Néné. These reconnaissance flights will provide empirical data that remote sensing analysts can use to create more accurate maps.

DUC technicians and Indigenous Guardians will take these maps back to people in the Dene communities who will incorporate their traditional knowledge. Then, DUC will produce a final map.

The maps will inform DUC’s own conservation planning efforts in the boreal. And it will help local communities make decisions about how to manage their territory for protected areas initiatives, treaty rights, recreation, and sustainable land use for industry.

“By combining our collective knowledge, we’ll be able to show where important caribou and waterfowl habitats are, for example,” says Smith.

Networking in the North
Steven Nitah is a former Lutsel K’e Dene First Nation chief. Raised by his great-grandparents on the land around Lutsel K’e, he has “memories of family unity” while spending the first ten years of his life camping, trapping small game, netting fish, and learning how to scrape and treat moose and caribou hides.

In his teenage years, Nitah experienced government policies that led him to a career focused on fostering his people’s responsibility to the land and reclaim their cultural identity in the process.

Now, as a lead negotiator for his people, Nitah brokers relationships between governments, non-government organizations, industry and First Nations. The agreement he helped negotiate between DUC and the Akaitcho Treaty 8 Tribal Corporation fits his people’s long-term vision for the land.

Nitah believes that the Dene and DUC are building a natural relationship through the wetland mapping project.

“The land manages itself, but we have to find ways to manage each other,” says Nitah. “Conservation is one of those tools.”

Bridging modern and traditional worlds
Paul Betsina first learned of wetland mapping from Nitah and Smith at a council meeting. Betsina’s interest piqued when he heard that survey crews would be recording and sharing locations of lichen and small shrubs as part of the project. These plants are a key part of the caribou diet.

“Of course we are concerned about caribou and what they eat and what’s left,” Betsina says. “Up North, this information isn’t as well documented.”

“The chiefs and council were behind the project 100 per cent.” says Betsina. When Steve Nitah asked him to work on the mapping survey as a First Nations technician, Betsina jumped at the chance.

Betsina soon learned the difference between bogs and fens, and the names of plants that make up different wetland types.

Although Betsina is modest about his contributions, his experience allowed him to see, in a tangible way, the survey’s long-term benefits.

Seeing the big picture
In Yellowknife, Betsina has met up with his survey crewmates. Over dinner, they debrief their survey work and share their experiences.

“We’ve only seen a snapshot of their land,” says Smith. “Wetlands are good indicators of environmental change. That’s why engaging with elders and youth, who’ve seen changes in the land over a longer period of time, is so important to our understanding of what these wetlands might look like in the future.”

The crews will spend a few days downloading their data. Some of them get back in the air, this time in a fixed-wing plane, to continue their survey work. Soon their observations will be factored into the larger map and provided to the people who, like them, will use it.

It’s a big job, but someone’s got to do it. A healthy future for this land—and the people and animals that share it—depends on it.

Parties of the Ramsar Convention Call for Alignment of Wetland Conservation...