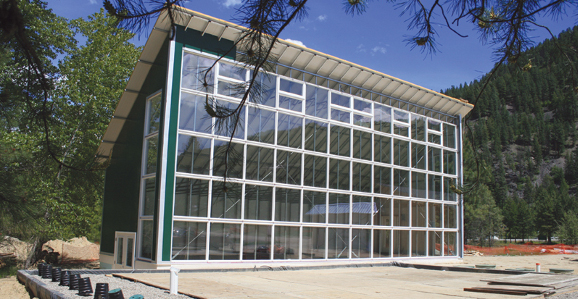 Roman aqueducts and sewers provide a powerful emblem of the antiquity of urban water infrastructure—centralized approaches to water and wastewater service provision may seem similarly old, but are in fact largely a product of the twentieth century. The centralized model arose as a response to a difficult conundrum: how to provide essential services to an urban form that was rapidly and radically transforming through a massive population boom and the unprecedented rise of the private car. The solution made sense, given the parameters of the day: energy was cheap and abundant, but land, equipment and labour, especially skilled labour, were expensive. Why not centralize and reap economies of scale? It’s an argument that still holds some sway even though our current situation could not be more different.

Energy is increasingly expensive and the consequences of how we use it are now among the most pressing global issues. We are no longer trying to rapidly expand our cities, but rather to densify them and corral growth with robust development boundaries. The economies of scale that have long been such a persuasive argument are coming under intense scrutiny as municipalities grapple with the costs of servicing far-flung suburbs with low population densities. As the unsuitability of the centralized model to meet the suite of issues we face today becomes increasingly clear, a new infrastructure model is urgently needed—and wastewater treatment is at its very heart.

In our current centralized model of wastewater treatment, sanitary sewage from a very large catchment area is treated at a single industrial-scale plant. Central plants typically have large land-use footprints (up to five hectares) and are situated in industrial areas away from population centres.

The essence of the decentralized model is that plants with small footprints are distributed throughout population centres with each plant treating a portion of the total sewage. The plants are normally linked together, analagous to a computer network, which enhances the overall robustness of the system. If a plant should go down, its load can be distributed to other plants in the network, so wastewater never goes untreated. These plants would need to have minimal or no impact on the aesthetics of the neighbourhood in which they are located. They would need to be neither unsightly nor smelly, as so many current centralized systems are.

There are no technical obstacles to decentralization: numerous technologies for small-scale decentralized treatment are in use around the world. One current project is being designed and built by British Columbia-based ECO-TEK. Adhering to Living Building standards, the sewage treatment design uses no chemicals and processes its own sludges. The system, Solar Aquatics, is a biological treatment system using plants and microorganisms in an aquatic ecosystem that produces no foul odour and looks like an aquaculture greenhouse.

The transmission infrastructure required for centralized systems—sanitary sewers, trunk lines, lift stations, et cetera—is increasingly expensive. Typically, it has to be sized for the projected population at the end of the design life of the plant. Municipalities are saddled with the upfront costs of pipes and pumps that will reach their design capacity in fifty years, while also bearing the risk that the population might not grow as expected.

An enormous amount of energy is required to pump wastewater over great distances to the central plant, and to pump treated effluent to where it is discharged. Infiltration and inflow add considerably to this energy requirement.

Most egregiously, centralized treatment is predicated on disposing of the partially treated effluent into our environment. In times of increasing water shortages, with many communities across North America facing water restrictions every year, disposing of water makes no sense.

In the decentralized model the costs associated with facility equipment, labour, and land are higher. Costs associated with transmission infrastructure, like trunk lines and lift stations, are a small fraction of those for centralized systems, as are the ongoing energy costs of pumping effluent to the centralized plant. Additionally, treatment plants and equipment can be scaled to real-time population, with more plants and capacity added as needed, rather than all at once at the outset.

More importantly, the decentralized model allows wastewater to be treated as a resource. Water is, after all, only wastewater if we waste it. Many small-scale technologies, including the Solar Aquatics System, treat sewage to tertiary quality, which meets reuse standards in most jurisdictions. As such, it can be redistributed for non-potable uses, such as irrigation and toilet flushing. Agriculture, golf courses, greenhouses, community gardens, and concrete factories are prime candidates for using reclaimed water.

See also  Look Before You Leak

Using reclaimed water allows fewer withdrawals from aquifers, rivers, and lakes, and reduces the amount of potable water treatment needed in the region. Reuse also introduces the possibility of a new revenue stream for the community that the centralized system does not. Where centralized systems are predicated on minimizing costs, decentralized systems can be focused on maximizing revenue. This holds appeal for all manner of potential system operators, from municipalities looking to improve their balance sheets, to private companies making strategic investments.

Wastewater treatment and reuse is only a part of the larger system of flows and balances that characterize the urban metabolism. Where the centralized model segregates water, energy and waste into different silos, to be dealt with by different professionals at different industrial facilities with different equipment, the decentralized model allows integration of water, energy and waste infrastructure to harness synergies between them. The biosolids in wastewater can be processed into methane in anaerobic digesters, which can be used to generate carbon-neutral electricity or burned as fuel in the transit fleet. These same digesters can also process the organic fraction of municipal solid waste, increasing the yield of methane. Wastewater contains a lot of thermal energy, which can be effectively harnessed for district heating, as is the case at the Neighbourhood Energy Utility at Northeast False Creek in Vancouver. Small-scale plants are versatile and adaptable and can be easily double and triple programmed to integrate these other essential infrastructure needs without dramatically increasing their footprints.

The good news is that this need not be an obstacle at all: decentralized plants can interface very well with conventional wastewater treatment plants and can even extend their useful service life by lessening the load they face. By their very nature, decentralized plants can be added to the sewerage network on an ad hoc basis. Each new addition can treat a certain amount of the total load until eventually, the entire network is covered. An example is the Centre for Interactive Research on Sustainability (CIRS) on the University of British Columbia campus by Busby Perkins+Will Architects. When complete, CIRS will provide 100 per cent of its potable water through harvested rainwater and will treat 100 per cent of its grey and black water in a Solar Aquatics System. The tertiary treated effluent meets the B.C. Ministry of the Environment unrestricted access standard and permission has been granted to use it for irrigation and toilet flushing.

The CIRS decentralized wastewater reclamation system incorporates an innovative net-zero system where the building’s flow-equalization tank is connected to the campus sanitary line. The benefits are two-fold. Firstly, this connection saves the cost of including a large holding tank in case the building experiences a sudden surge of wastewater or the system has unexpected technical problems. More importantly, the connection allows the Solar Aquatics to process more sewage than the building produces. If the green roof, for example, is in need of more irrigation during summer months when building use is lower, the system can accept sewage from the sanitary line and more reclaimed water can be produced.

End of an era

The centralized model of infrastructure was sufficient to meet the needs of an era characterized by rapid population expansion, cheap energy, and perceived lack of environmental consequences. The new challenge we face is our need for dramatic improvements in energy and water efficiency in the face of climate change. Reconfiguring our infrastructure towards a decentralized model is the biggest step we can make in this direction—beginning with wastewater treatment. Widely distributed plants with small footprints can slowly, cumulatively replace the treatment capacity of centralized plants, without requiring their premature closure. Such small plants also provide a myriad of other opportunities, such as proximity to downstream non-potable water customers and integration with district energy infrastructure. There are no technical barriers and few financial barriers to this transition, just the inertia that develops over decades of doing things a certain way. With new built examples proving out this decentralized paradigm coming online each day, we’re starting to overcome that inertia.  WC

Blueprint for Action on Contaminants in Wastewater