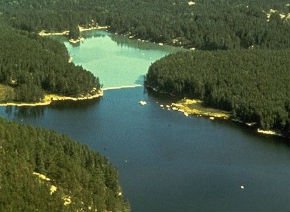 The Experimental Lakes Area (ELA) research centre—a collection of 58 lakes in northwestern Ontario where scientists have conducted environmental research for more than 40 years—is set to be transferred from the Government of Canada to the Ontario government and the International Institute for Sustainable Development (IISD), a Winnipeg-based non-profit with offices in Ottawa, New York, Geneva, and Beijing. The Canadian scientific community has been campaigning to save the research station for two years, after a lack of funding threatened to shut it down.

“This is an important milestone for science and for the protection of our lakes through freshwater research,” said Manitoba’s Minister of Conservation and Water Stewardship Gord Mackintosh. “Manitoba is committed to research and actions that protect our lakes, especially Lake Winnipeg, and this agreement helps that research continue.”

The Manitoba Government will provide the IISD with $6 million in funding over a six year agreement. During that time, $900,000 of the money will be dedicated to freshwater research and technology.

“We are very pleased that a final agreement has been reached that will allow research at the world-renowned Experimental Lakes Area to continue,” said Scott Findlay, a founder of Evidence for Democracy, an organization that advocates for the transparent use of science and evidence in public policy and government decision-making. “We hope that the new agreement will allow ELA to continue to produce the world-class research that provides critical information on the impacts of human activities on aquatic ecosystems.”

Despite the positives of a lifeline being extended to the world-renowned research centre, Diane Orihel, who launched the Save ELA movement, said she believes the loss of public funding for science is still a concern.

“The transfer of ELA out of hands of government is a double-edged sword,” she said in an Evidence for Democracy article. “Scientists will hopefully enjoy a new freedom at the IISD to explore controversial research questions and freely communicate their scientific findings to the public. On the other hand, the Government of Canada has divested itself of an incredibly valuable tool and science team to support federal policies to protect and manage our country’s freshwater and fisheries resources.”