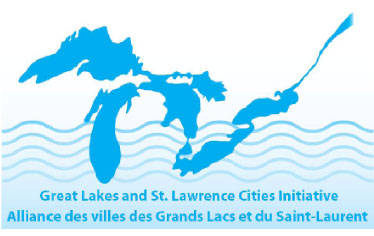 “Infrastructure investment, particularly focused on climate adaptation, is needed by all shoreline communities,” said Salaberry-de-Valleyfield Mayor Denis Lapointe, member of the Cities Initiative board. “More reliable information on climate projections for the region would also help us plan for future infrastructure needs.”

The mayors began their day at a reception with Sanders, where they discussed important binational concerns with the Great Lakes, including the degraded condition of Lake Erie as a result of nutrient loadings from urban and agricultural runoff, the safety of cross-border transportation of fossil fuels, and the threat posed by Asian carp.

“Over 100 years of successful binational cooperation to protect the Great Lakes and the St. Lawrence reflects our strong friendship and shared interests in the region,” said John Dickert, mayor of Racine, Wisconsin and officer on the Cities Initiative board. “Working together, American and Canadian mayors keep our respective governments accountable for protecting this great global freshwater resource.”

Meetings with Great Lakes and St. Lawrence members of Parliament provided mayors with the opportunity to raise regional issues with their federally-elected representatives as well. Kellie Leitch, MP for Simcoe-Grey; Francis Scarpaleggia, MP for Lac-Saint-Louis; Larry Miller, MP for Bruce-Grey-Owen Sound; and Brian Masse, MP for Windsor West met with their constituent mayors that day.

Mulcair also met with the mayors to share his views on Great Lakes and St. Lawrence protection.