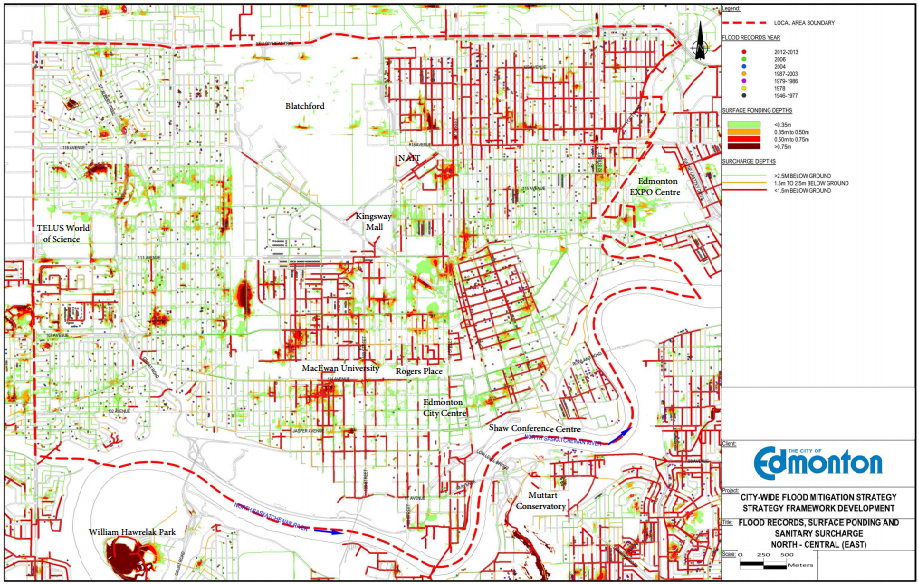 On November 9th, Edmonton announced a $107,081,000 stormwater management project and, on the same day, released a preliminary study on flood mitigation throughout the city.

Amarjeet Sohi, Minister of Infrastructure and Communities, and Don Iveson, Mayor of Edmonton, announced the stormwater management project in the city. Funding will be contributed by the Government of Canada and the Province of Alberta, providing up to $30,316,000 and $11,910,000, respectively. The remainder of the costs will be covered by the city.

“We are grateful to the governments of Alberta and Canada for partnering with us on this much needed infrastructure that will help us mitigate flood risks in our city,” said Edmonton’s mayor Don Iveson.

The provincial portion of the funding was directed by the Alberta Community Resilience Program (ACRP), a multi-year grant program supporting the development of long-term resilience to flood and drought events, which also supports integrated planning and healthy functioning watersheds. The federal funding comes through the ungoing government investments under the green infrastructure arm of its phased infrastructure spending.

Edmonton’s Mill Woods neighbourhood was hard-hit by heavy rains, with over 500 homes reporting flooding in 2012. This stormwater management project will improve the region’s capacity to deal with rain by providing overland storage for stormwater and increased capacity in the storm-sewer system. The project hopes to protect more than one thousand properties.

Postmedia made a Freedom of Information request to the city that it disclose its flood maps. The maps show both historical flooding and where the storm-sewer system is expected to reach capacity in the even of a 1-in-100-year flash flood.

The city used high-resolution topographic maps of Edmonton’s flat tablelands matched with sewer data to run computer simulations on the outcome of the high-risk flood scenario. Though it is unlikely to happen, it provides insight into weaknesses in the storm-sewer network.

“Not every neighbourhood in Edmonton required as assessment,” reads the report. “The neighbourhoods that are part of the assessment were built before 1989 and are locatd withint he Anthon Henday ring road.”

Complete documentation on the City of Edmonton’s flood mitigation study can be found at the following link: https://www.edmonton.ca/city_government/utilities/city-wide-flood-mitigation-study.aspx