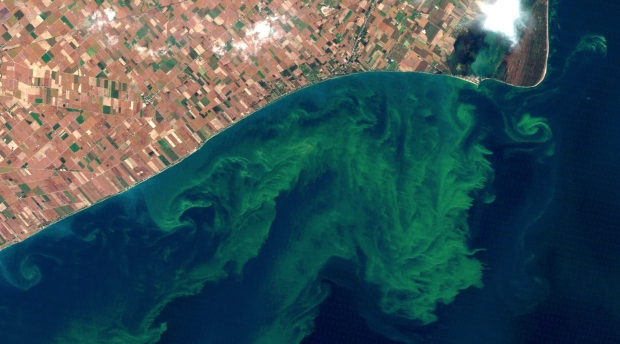 A group of American universities and government agencies has completed a socio-economic study of agricultural management plans for curtailing harmful algal blooms and the willingness to pay for them.

The researchers announced their first results this week, both at the American Geophysical Union (AGU) fall meeting and in a special issue of the Journal of Great Lakes Research.

Jay Martin, director of the Field to Faucet water quality program at The Ohio State University, leads the project, which maps both the physical causes of toxic algae and the social landscape around the problem.

Martin focused on the recent binational agreement between the United States and Canada to cut phosphorus discharge into Lake Erie by 40 per cent. They surveyed farmers and the public and built watershed models to explore different ways to keep phosphorus from reaching the lake, where it feeds toxic algae.

“The big question now is, can we reach our goal of 40 per cent reduction, and how do we do it?” said Martin. “The hopeful news that we have found is that there are multiple ways to get there, and farmers are already adopting the very same agricultural practices that we found to be most promising. If they can continue to adopt these practices and even accelerate their adoption, we can reach the 40 per cent reduction we need to have safe levels of algal blooms in Lake Erie, while preserving agricultural production.”

The researchers have identified three key farming practices that could reduce algae levels: subsurface application of fertilizer, use of cover crops, and use of buffer strips. Cover crops are grown in fields that would otherwise go fallow to keep rain from washing phosphorus-laden fertilizer into the lake. Buffer strips are non-crop plants that surround fields and serve the same kind of purpose.

Each of those numbers, while encouraging, falls at least 20 per cent short of where they need to be to reach phosphorus reduction goals, the study found.

Also encouraging: researchers found that Ohio residents were willing to help farmers pay for these practices. In the first survey of its kind, they asked residents to put a monetary value on reducing toxic algae in Lake Erie.

For example, they asked people how much reducing algae by 10 per cent was worth. The answer that came back was quite specific: $150 million. And the answer was consistent, in that when researchers asked about reducing algae by 20 per cent or 30 per cent, respondents placed a $150 million value on every additional 10 percent. A 20 per cent reduction was worth $300 million, and so on. People said they were willing to pay slightly higher food prices, or even a special income tax or sales tax that would benefit farmers to make the changes happen.

Reducing algae would likely carry a higher price tag, however: “While it looks like the reduction is possible, it will be a heavy lift,” Martin said.

In fact, $150 million was the preliminary estimate that Ohio State researchers made in a study with the Nature Conservancy earlier this year—but for annual mitigation of phosphorus runoff in only the most critical areas. That project was led by Stuart Ludsin, an associate professor of evolution, ecology and organismal biology and co-director of Ohio State’s Aquatic Ecology Laboratory.

“If done correctly, agricultural conservation practices aimed at improving water quality in Lake Erie can also boost the health of stream-fish communities throughout the watershed,” he added.

Lake Erie is at the centre of toxic algae research today, because it contains 50 per cent of all the fish in the Great Lakes, supports a $1.7 billion tourism industry and provides drinking water for 11 million people.

Martin and his team are presenting their findings at the AGU session “New Frontiers in Water Resources: Achieving Water Resource Security in Times of Climate Change, Urbanization, and Agricultural Expansion” co-organized by Noel Aloysius, who is also involved in the study. The session also highlights some of the promising strategies being used elsewhere.

Among them: Michele Reba, a hydrologist with USDA, is testing ways for farmers in the Mississippi Valley to capture and reuse their irrigation water, which keeps fertilizer nutrients on the farm.

Restoring lost wetlands—or creating new ones—is another strategy that is proving successful in the Florida Everglades. There, William Mitsch, director of Everglades Wetland Research Park at Florida Gulf Coast University, has found that tuning the plant and soil composition of wetlands can nearly eliminate all phosphorus runoff into surrounding waters.

The Journal of Great Lakes Research explores these and other topics, including the roles of sediment, plankton, and climate change in promoting algae, and is open access.