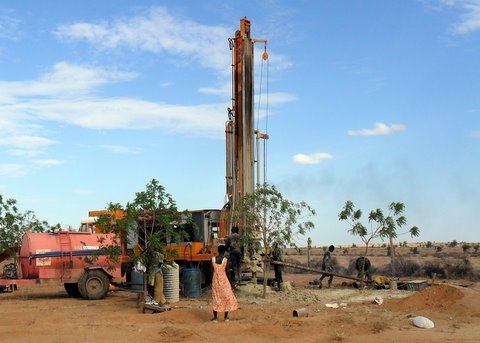 British Columbia’s Energold Drilling Corp.’s manufacturing division, Dando International Drilling Ltd., has formed a new subsidiary, Dando Drilling Services Ltd., which will specialize in water drilling, and which has entered into a joint venture in Africa with a local drilling company.

Dando’s initial contribution to the project will be a Watertec 40 truck mounted rig and several ancillary vehicles. They will have the option to add additional rigs as client demand increases. Already in use around the world, the Watertec 40 has a 40,000 kilogram pullback, and can drill water well holes to a depth of over 2,000 metres. The rig has been sold to a number of international clients.

In a press release, Energold discussed what it sees as a vital opportunity to “capitalize on this growing and necessary segment of the marketplace.” The release discusses how, with water’s growing scarcity, the Organisation for Economic Cooperation and Development (OECD) have estimated water infrastructure spending of over $1 trillion by 2025. The upward trend in spending has already begun; water infrastructure spending in 2009-2010 totalled $8.3 billion, a 12 per cent increase from 2002-2003’s total of $3.3 billion.

The press release emphasized Energold’s belief that water services will appeal to its existing mineral and energy clients, many of whom are facing rising costs together with a need to find fresh water wells near mine sites. It also mentions Dando’s history of drilling for water. The company’s first water drilling venture occurred in London nearly 50 years ago, during a cholera outbreak.