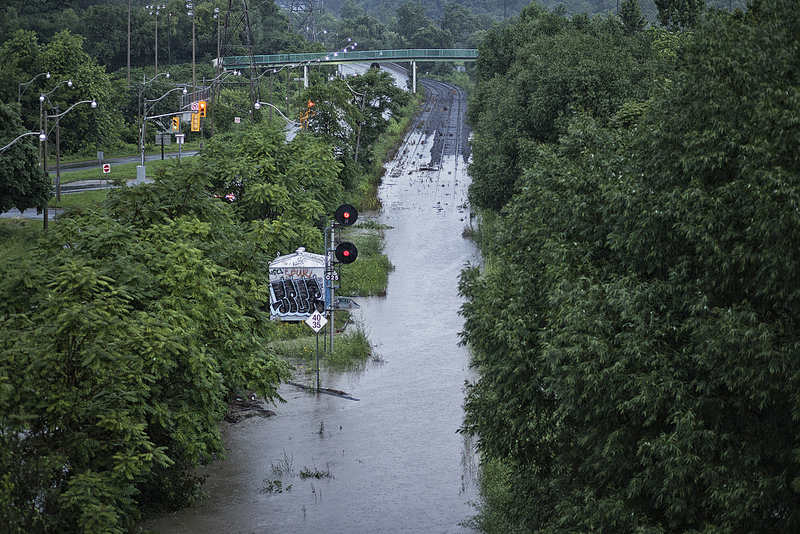 Toronto is still in recovery mode after being drenched by record-setting rainfalls last Monday evening. The thunderstorm began towards the end of the work day, and dumped an unprecedented 126mm of rain, breaking the almost 50-year-old record of 121mm, set in 1954 during Hurricane Hazel. The amount is substantially more than Toronto generally receives in the entire month of July.

The heavy downpour caused flash floods throughout the city. Subway service was shut down for extended periods, and passengers had to be rescued from a Richmond Hill bound GO Train stranded in waters deep enough to flood the lower cars.  The Don Valley Parkway was also impacted, with flood waters seeping over barriers and cars abandoned mid-highway, causing a full closure of the busy route. Many of the city’s underpasses also flooded, and some cars were left almost entirely submerged.

Huge swaths of the city were also left in darkness for substantial portions of the night. Hydro One reported 300,000 people affected, with many thousands still without power into Tuesday afternoon. CEO of Toronto Hydro, Anthony Haines, asked residents to cut their power usage in an effort to ease strain on the system. “The system is operating beyond its operating capacity as I stand in front of you right now,” he said in a press conference.

The flooding came while Alberta is still struggling to recover from dramatic flooding caused in part by torrential rainfall.

“We are seeing severe storm events much more frequently in recent years,” said director of the Centre for Engineering and Public Policy at McMaster University, Gail Krantzberg. “The so-called ‘hundred years storm’, large events only expected once a century, are now arriving as shockingly as two or three times in some years.”

Donald Burn of the Department of Civil and Environmental Engineering at the University of Waterloo commented on the strain an extreme environmental event can have on a city’s infrastructure.

“It’s something that can happen in Toronto, but it’s not something you’d expect to see on a very regular basis,” he said of the storm. “[As engineers] we always anticipate there will be events that exceed the capacity of the infrastructure, and there will be times you get flooding. That’s the nature of the process. But this certainly was a large event, beyond what we’d expect infrastructure to handle.”