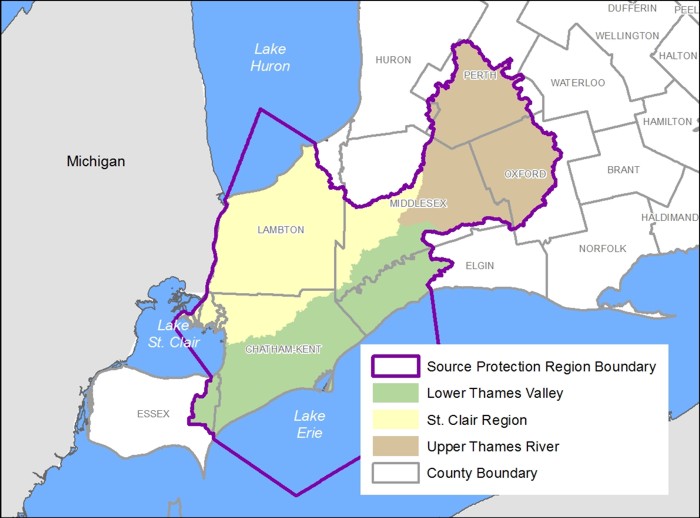 Source Protection Plans in the Thames and Sydenham region have been approved by the provincial government, as of September 18, 2015. The water protection plans were developed by municipal and community partners.

Source Protection Plans are science-based plans designed locally to protect the water quality of lakes, rivers, and sources of underground water that supply drinking water systems to municipalities. Bob Bedggood, Chair of the Thames-Sydenham and Region source protection committee said that the plan would be fair, equitable, and based on sound science.

“We are confident that this plan will protect municipal sources of drinking water for future generations. We would also like to recognize those that helped to shape our decision-making; namely our municipalities, the Ontario Ministry of the Environment and Climate Change and Conservation Ontario.”

The approved plans will help the region create management plans to reduce risks associated with waste disposal sites, manure, livestock grazing, road salt, and other potential risks. It will also help Thames-Sydenham to collaborate and develop programs that promote best practices for reducing algal blooms; implement an inspection program for on-site sewage system maintenance; and monitor the implementation and effectiveness of measures outlined in the plan.

Twenty three of these systems draw water from a groundwater source, and the rest take it from Lakes Huron and Erie, or the St. Clair River. These drinking water sources are susceptible to contamination, and if problems develop over a long period, they can be costly and impossible to correct. Through the Act, the local committee is able to protect the municipal sources of drinking water. The source protection plan is able to determine vulnerable areas, identify potential threats to the region’s drinking water sources, and develop plans to deal with them.

“Few things are as important to our health as having safe water to drink,” said Glen R. Murray, Minister of the Environment and Climate Change. “Ontario’s approach to protect drinking water has made our tap water among the best protected in the world. Protecting the sources of drinking water – our lakes, rivers and groundwater – is the foundation of our safety net.”

Protecting the province’s clean drinking water is a part of the government’s plan to build Ontario up. The 22 source protection plans—19 of which have already been approved—will cover areas where 95 percent of Ontario’s population resides.