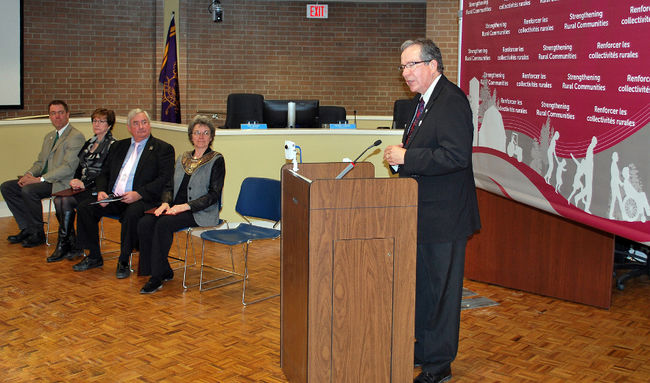 The three grants will come from the province’s $100-million Small, Rural, and Northern Municipal Infrastructure Fund. They are:

• $1.1 million to help Owen Sound pay for upgrades to the sanitary sewers under a section of Third Ave. E., between the Harry Lumley Bayshore Community Centre and East Bayshore Road

According to Leal, the provincial government has invested significantly in water treatment to prevent tragedies such as the 2000 Walkerton E. coli outbreak from happening again.

“Ontario is now a North American leader in providing safe, clean drinking water. Every resident in Ontario—whether you’re in Thunder Bay or Timmins, Cobourg or Cochrane, in Owen Sound or in Hanover—they want to be able to have confidence when they turn that tap on that that water is going to be safe to consume,” he said in an interview after a news conference at city hall.

“This county road is a very important link on the east shore of Owen Sound…It’s a very well-travelled road and we appreciate the support of both the province and the county to replace this road,” she said during the press conference.

Water and sewer upgrades on the street will “better prepare the city for future development,” she added.

South Bruce Peninsula Mayor John Close said the money for the Oliphant treatment plant “will go a long way to bringing this system back online.”

The plant hasn’t operated since January 2011. The town has been trucking water to the system from Wiarton, Ontario since then. Among the fixes that have to be made are changing the chemical process, adjusting the chlorine doses, and cleaning the green sand at the plant.

Hanover Mayor Kathi Maskell said the provincial grant for her community will help cover $147,000 in upgrades to one of the town’s deep wells, which accounts for 35 per cent of Hanover’s water supply. —Kristen Curtis