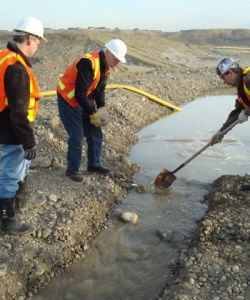 With billions of dollars at stake and an Ontario economy in need of productivity-enhancing infrastructure, a new study says that improvements could be made to the evaluation process used by governments to select projects. More than $200 billion has been pledged by the federal government and Queen’s Park over 12 years. If it is spent wisely, and based on integrated decision-making, Ontario could witness another Golden Age such as in the 1950s and 1960s where major investments transformed our economic and social landscape.

According to Michael Fenn, former Ontario deputy minister and author of a new report published by the Residential and Civil Construction Alliance of Ontario (RCCAO), governments need to be more courageous and forward-looking to pave the way to prosperity.
“Projects that might have seemed expensive in the 1950s are now viewed as wise investments,” Fenn said. “The same holds true today, but we must ensure that projects are justified based on rigorous study and analysis.”

Part 1 of the study recommends that better decision-making structures be put in place to elevate infrastructure planning and project selection.

Part 2 takes a detailed look at the Alternative Financing and Procurement (AFP) model used by Infrastructure Ontario (IO). IO was set up, in part, because many traditionally procured projects experienced cost overruns and significant delays. In his review of public-private partnerships (P3s) around the globe, Fenn says that up-front planning and oversight for big projects has demonstrated that the current generation of P3s provides good value for money and good “insurance” for the delivery of major capital projects. Fenn goes further by suggesting that positive AFP-type provisions could be incorporated into traditional procurement processes as a way to offset costly and time-consuming mid-project changes that often occur.

Andy Manahan, executive director of the Residential and Civil Construction Alliance of Ontario (RCCAO), welcomes the findings in the report, saying that “Ontario-based contractors have expressed that there are significant barriers to bidding on larger projects managed by IO. Michael Fenn has provided useful advice on ways to open up the process to domestic firms.” He adds that “building up local capacity will result in more bidders and this will save the taxpayers money.”

Michael Fenn states that any issues with the AFP process are dwarfed by the recurrent problems with traditional procurement of construction projects. In fact, the final recommendation (No. 23) suggests that an “innovation dividend” of 10 per cent could be achieved through the AFP process. Based on the level of capital projects identified in the Long-Term Infrastructure Plan, this could save Ontario taxpayers, at a minimum, several billion dollars over the next decade.