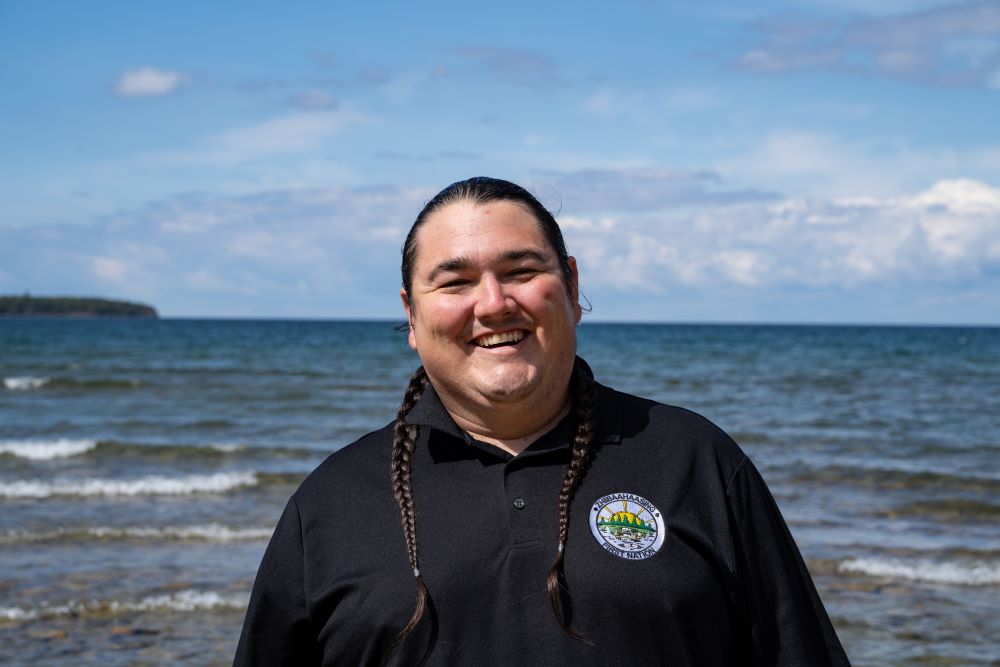 In our September/October 2022 issue, we spoke with system operators about the challenges they face in providing their communities with clean drinking water. Some work for only a few days a week, earning wages barely above the legal minimum; others are almost permanently on call, fulfilling duties unrelated to water that leave them little time for professional development or even vacation. With threadbare budgets, operators sometimes supply their own equipment, borrow materials from neighbouring communities, and negotiate with managers who are juggling multiple, often competing priorities. And while situations often differ, operators and community leaders are finding their voice, working collaboratively towards common cause, and finding innovative solutions to complex problems.

Zhiibaahaasing First Nation,on Manitoulin Island close to the northern shore of Lake Huron, is surrounded by clean, fresh water. Yet this community of 86 people has been under a boil water advisory since 1992 for a reason which might seem surprising.

Instead of their water being conveyed by underground pipe, it is delivered by truck from the community’s small treatment plant. “You can make great water in a water plant,” Zhiibaahaasing operations and maintenance supervisor Jonathan Riberdy says. “But once you truck it, it turns into a whole new ball game because you have potential contamination from hoses, cisterns and tanks, so you can’t be 100 percent sure that the water is safe.”

Small rural communities like Zhiibaahaasing often rely on individual wells, augmented as needed with UV or other household-scale protective systems, and these are generally more cost-effective than large-scale plants. However, while Manitoulin is the largest freshwater island in the world, radon gas deep in its aquifer nixes that possibility. Until 2020, Zhiibaahaasing was managing well enough with a small-scale treatment facility that drew water from the lake rather than the ground. While not a perfect system, it “had lots of little issues that needed to be rectified…but was otherwise a great little package plant and was doing its job,” Riberdy says.

The trouble started in July 2019, when heavy rains sent Lake Huron water levels high enough that waves were rapidly eroding the shoreline and beginning to breach the plant. Riberdy consulted with Indigenous Services Canada (ISC), which provides base funding for First Nations services, and devised an emergency fix. With his Chief’s approval, Riberdy hired a private contractor (E. Corbiere & Sons Contracting) from nearby M’Chigeeng First Nation to build a berm to surround the facility. “We worked until 3 o’clock in the morning that first night to make sure that the building was secure, and we carried on for weeks, working 16-hour days to ensure the safety of the water plant,” Riberdy says.

The emergency berm fared well enough, but rapid snow melt the following spring drove Lake Huron levels up yet again and water seeped onto the plant’s floors. The final straw came when a powerful wind storm damaged the plant and a structural engineer advised that it be decommissioned. “It was May 2020, in the middle of COVID, and Zhiibaahaasing suddenly had no water,” Riberdy recalls.

Zhiibaahaasing’s situation, while precarious, proved something of a watershed moment. Community leaders had long pressed ISC and its predecessor, the Department of Indian Affairs and Northern Development, for a full-scale treatment plant, complete with a small tower and piped distribution that would finally deliver certifiably potable water. For now, however, the sudden, urgent need for water diverted attention away from a long-term solution to simply restoring service for the community.

Riberdy guided the way, bringing in BI Pure, a Surrey, B.C. company, that builds standardized water treatment plants inside large shipping containers. Installed in late 2020, the sea can plant not only includes chlorination, filters to catch larger contaminants, and UV disinfection to eliminate smaller pathogens, but it also has a filling station for delivery trucks. “It was the fastest way to get us water during COVID,” Riberdy says. “If we were to have built a building, we would have had to go through design and engineering, which takes a couple of years. The sea can was already engineered and built. All we had to do was make a few adjustments to make sure it would work for our community.”

For the six months it took to prepare, deliver and install the sea can, Zhiibaahaasing devised an interim plan to secure water for drinking and other household uses. Riberdy arranged for Ayr, Ontario-based Bright Water Services to source water from another Manitoulin First Nation and truck it to residents three times a week — roughly the same regimen Riberdy had maintained with the bands’s own truck prior to the treatment plant’s decommissioning.

He was already midstream in a career as a personal support worker with Mnaamodzawin Health Service, serving Manitoulin’s six First Nations. When Zhiibaahaasing’s operations and maintenance supervisor decided to retire, Riberdy, who lived in the community, was urged to apply for the job. “They wanted to get someone young into the field to take care of the water,” he says. Riberdy received initial training and guidance from the operator he was replacing and liaised closely with training personnel from the Ontario Clean Water Agency (OCWA) even as he learned to drive heavy equipment, studied his new field, and wrote exams to achieve the required certifications: Operator-in-Training (OIT), followed by Level 1, and then the provincial Entry Level Drinking Water Course (ELC). “I wanted to level up as fast as I could, and that’s exactly what I did,” Riberdy says.

Certifications in hand, Riberdy approached the job with gusto, serving as a director for the Aboriginal Water and Wastewater Association of Ontario (AWWAO) and as a project manager for Swim Drink Fish Canada, which monitors beaches for safety and promotes their protection.

These efforts were all referenced when ISC awarded Riberdy its National First Nations Water Leadership Award in 2021. The award, in fact, seems to herald Zhiibaahaasing’s long-awaited demand for federal assistance with respect to its water treatment needs.

In a public statement, Indigenous Services Minister Patty Hadju remarked that, “The expertise and commitment of water operators like Mr. Riberdy are vital in achieving our shared goal—ensuring that all First Nations communities have access to clean drinking water and maintaining strong water and wastewater infrastructure.” Around the same time, ISC granted the community $2.9 million from its Green Infrastructure stream, a part of the joint federal and provincial Investing in Canada Infrastructure Program (ICIP), towards the cost of an eventual new system that will treat and deliver potable water.

Part of the problem, Riberdy says, has been that ISC has traditionally calculated funding according to a First Nation’s size, and Zhiibaahaasing’s population was below the threshold needed to qualify for the kind of plant needed to introduce piped water. However, the Crown agency has more recently enabled funding for even modest-sized communities when projects are deemed necessary.

Riberdy has adjusted his work duties for the next while so he can focus exclusively on selecting a suitable treatment system and getting it approved and ready for design. “Our water’s clean, so I suspect it would be a slow sand filtration water plant, but there’s no set-in-stone plan for size or for what kind of plant it will be,” Riberdy says. Zhiibaahaasing also needs to hire a project manager experienced with large technical projects who can steer the First Nation through feasibility studies, commissioning, and eventual completion.

Riberdy is grateful that a resolution to his community’s struggle for clean water appears in sight, and recognizes that it wouldn’t have been possible without the ongoing support from his band manager, chief, and council, and from neighbouring communities. He’s hopeful that the community can have clean, potable drinking water and is off the boil water advisory by 2024. “Water is life. Without water, we can’t live. It’s a necessity everyone needs, not a privilege. So the first time we turn our taps on and I can say we’re off the boil water advisory and drink that water from that tap in my home will be a very emotional day for me.”

While Riberdy and Zhiibaahaasing FN’s story is inspiring, they not alone in their struggle for clean drinking water and working conditions that match. Bita Malekian, an ambassador with Water Movement, an organization dedicated to bridging connections between Indigenous water system operators, says Riberdy’s story is not uncommon. “Water Movement has met Indigenous operators throughout Canada who are often championing their roles with very little support,” Malekian said. “They continue to rely on very little while being expected to bring critical thinking, innovation, and resiliency to their work every single day.”

Malekian says ISC’s National First Nations Water Leadership Award is a wonderful way to recognize the work these operators do and the challenges they overcome, but she calls for a federally proclaimed National Indigenous Water Operator Day. “With all the operational challenges operators face, the time to appreciate the sacredness of water seems to become increasingly lost,” Malekian says. “We need to recognize all of these hidden heroes and provide a space for operators, experts, and troubleshooters to connect so they can discuss the unique challenges that face remote communities. Now, more than ever, having a national day to reflect will put the much-needed spotlight on the unique and ongoing challenges communities face, provide a space for Elders to share sacred water stories, and remind community members about those working tirelessly, day in and day out and without recognition, to ensure clean water is flowing through their taps.”

Saul Chernos is a freelance writer with Water Canada.

City employee receives province-wide recognition as Operator of the Year