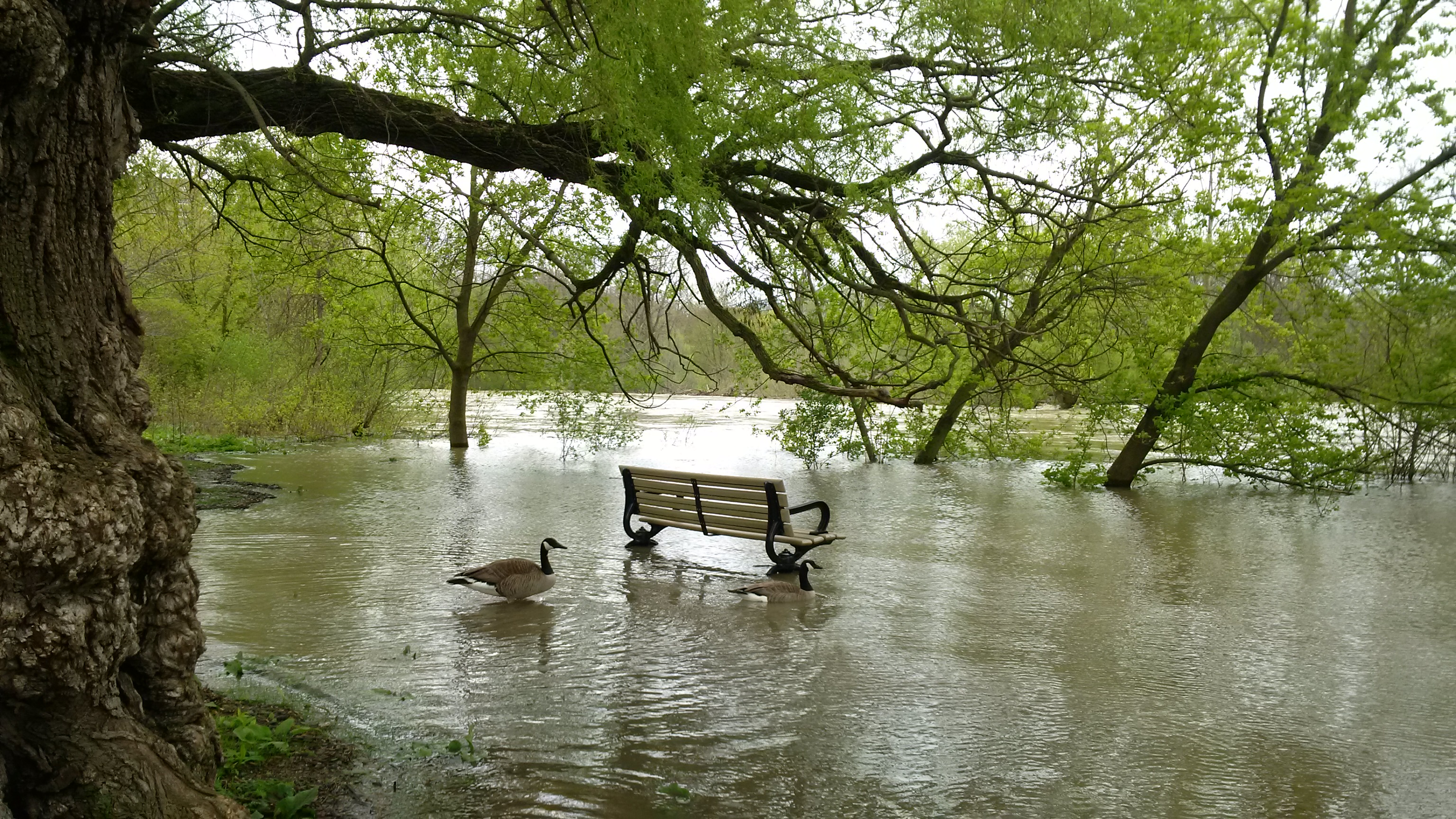 Spring and summer 2017 have been among the wettest on record in eastern North America. And the world is watching Houston, the Caribbean, and Florida this week, where the remains of Hurricane Harvey and beginnings of Irma have caused devastating flooding.

Rainfall amounts in the spring broke records in places like Toronto, where 44.6 millimetres of rain fell in 24 hours. The downpours earlier this spring caused the stormwater infrastructure in Canada’s biggest city to overflow, leading to flooding of busy downtown streets.

Urbanization in many North American cities has led to a rapid loss of permeable surfaces where water can freely drain. Coupled with the growing downtown core population in cities Toronto, this means that the stormwater and sewer systems in place must manage more water than in previous decades.

Furthermore, global temperature increases have been linked to the rise in extreme weather events worldwide, a trend that could worsen if global warming is not brought under control.

Many cities are ill-equipped to deal with these unprecedented amounts of precipitation due to their insufficient and outdated stormwater infrastructure.

Twenty three per cent of Toronto’s downtown sewers are combined, meaning that both the city’s stormwater and wastewater flow together within one pipe to a water treatment plant. In periods of heavy rainfall, the amount of stormwater in the sewer can reach capacity and overflow onto Toronto’s streets and into its lake and rivers.

That means to prevent flooding in downtown areas, sewage is released—untreated—into bodies of water that permit swimming and other recreational sports.

With rainfall amounts on the rise globally, it’s a crucial time to examine how cities can retrofit their existing building infrastructure to alleviate flood damage and deal with stormwater in a more sustainable manner.

Green roofs for stormwater management
Green roofs are a green infrastructure (GI) option that can be applied to virtually any rooftop given weight load capacity. The benefits of green roofs extend far beyond their obvious aesthetic appeal.

A study done by University of Toronto civil engineer Jenny Hill and co-researchers at the school’s Green Roof Innovation Testing Lab (GRIT Lab) showed that green roofs have the capacity to capture an average of 70 per cent of rainfall over a given time, relieving underground stormwater systems and releasing the rain water back into the atmosphere.

The watering schedule was shown to have the greatest effect, with retention capacity increasing from 50 per cent with daily irrigation to 70 per cent with sensor-activated or no irrigation. In other words, roofs that have not been watered, or are only watered when their soil reaches a predetermined moisture level, have a greater capacity to absorb stormwater.

Furthermore, the study calculated a new peak runoff coefficient—a constant value used to calculate the capacity of a green roof to hold water—for green roofs to be around 0.1-0.15, an 85 to 90 per cent reduction compared to an impermeable surface.

Designers and engineers routinely use a figure of 0.5 (50 per cent reduction) to assess green roof performance. This discrepancy between industry practice and regional evidence-based findings highlights the need for further research.

The second most significant variable for stormwater retention was the soil substitute. The most widely used green roof planting material is based on guidelines from the German Landscape Research, Development and Construction Society (FLL).

The FLL recommended a mineral aggregate because it’s thought to be longer-lasting and hardier than biological soil substitutes. But this recommendation has been challenged by research today.

Hill and her team compared the mineral growing material to wood compost. The compost outperformed the mineral by 10 per cent (70 per cent versus 60 per cent rainfall retained) in beds with no irrigation, and had minimal compression or break-down over time.

Another key finding in Hill’s study demonstrated that when already damp, either from watering or rain, the planting material had the biggest influence on water retention. The compost outperformed the mineral soil substitute by as much as three times when fully saturated (83 per cent rainfall retained versus 29 per cent).

Compost a better soil substitute
That means that the compost not only performed better in every season, but it performed a great deal better in rainy seasons and during back-to-back storms.

Planting depth (10 centimetres versus 15 centimetres) and the plant family (succulents versus grass and herbaceous flowering plants) were both shown to have scant impact on stormwater retention compared to the planting material and watering schedule.

And so without compromising stormwater management, plant selection can meet aesthetic goals and environmental benchmarks such as biodiversity and species habitat.

One of the constraints for green roof construction is weight loading, particularly in buildings that were not originally constructed to accommodate the weight of a saturated green roof. Thus, a 10 centimetre planting depth as opposed to 15 would mean more roofs could be eligible for retrofit.

Nonetheless, even though a biodiverse plant palette including grasses and herbaceous plants would be a more aesthetically and ecologically rich green roof option, those plants do require watering in order to survive in cities like Toronto. Since irrigation has a negative effect on stormwater retention, green roof designers can consider drought-resistant succulent plants like sedum.

However, when herbaceous plants are planted in compost rather than mineral planting materials, the decrease in stormwater retention capacity could be prevented.

And so Hill and her team’s research into four distinct green roof variables allows us to understand the benefits and limitations of each, and how they can be combined.

Green roofs: Optimal green infrastructure
In our opinion as researchers at the GRIT Lab, green roofs are the optimal urban green infrastructure due to their multi-functionality: They can be retrofitted onto existing buildings, they provide biodiverse space for urban wildlife and they can be enriching public spaces for city-dwellers to enjoy. Additionally, green roofs can make previously inhospitable places pleasant, and provide new outdoor space for office workers.

These recent findings clearly show the potential of green roofs. But thorough scientific studies on green roofs, like those undertaken at the GRIT Lab, are necessary in order to determine the best green roof composition for optimal performance.

For example, though planting type had little effect on stormwater retention, the herbaceous mix of native plants has been shown to be more attractive for native bees and is arguably more attractive. This information is critical; although succulents are currently the industry standard, planting only succulents on roofs could potentially have a negative impact on urban ecology in various regions.

An additional variable to consider when designing a green roof is its location. GRIT Lab researcher Scott MacIvor and co-researchers found that building height matters: There are far fewer bee hives when green roofs are too high, and so designing a roof aimed at helping bees higher than eight storeys would be futile.

As storm events become more frequent and severe for municipalities, cities with aging stormwater infrastructure are struggling to find ways to alleviate the impact. Green roofs can be a part of this solution, but all green roofs are not created equal. The proper research and knowledge is essential.

Editor’s note: This is an updated version of an article first published on The Conversation on Aug. 21, 2017.