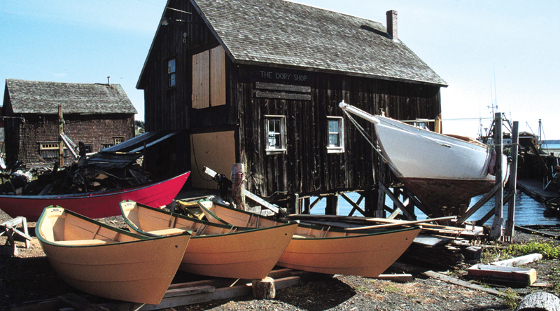 For over 250 years, the town of Lunenburg, Nova Scotia has been associated with water. Located on a peninsula southwest of the provincial capital of Halifax, Lunenburg has not one but two harbours, upon which the town has built its reputation as a centre for fishing and shipbuilding. Many people know Lunenburg as the home port of Canada’s most famous sailing ship, the Bluenose, or as a quaint seafaring village, popular among vacationers. However, while the fact that the town has remained largely unchanged since the early 1800s is a selling point for tourists, it has also caused major problems for town planners attempting to meet new provincial and federal drinking water standards.

The Lunenburg water utility supplies about 1,400 commercial and residential customers from the Dares Lake Reservoir, an open-surface lake outside of town. The system was established in the late 1800s, with extra storage and pumping stations being added as demand for water increased. Chlorine and lime have been used to disinfect and alkalize the water since 1958 and the 518-acre watershed was declared a protected area in 1972 to insulate the drinking supply from any contamination that could come from development. This ability to adapt with the changing times has prevented Lunenburg tap water from causing any major issues in nearly two centuries of operation.

In 2002 the Lunenburg water utility faced its biggest challenge yet. While the town’s water continued to test within Health Canada’s safe water guidelines, the outbreak of E. coli in Walkerton, Ontario in 2000 prompted the Province to introduce the Nova Scotia Drinking Water Strategy, which placed new restrictions on the use of water from open reservoirs. Under the new law, surface water would have to be filtered in order to reduce potential contamination from chorine-resistant parasites, organic materials, and trihalomethanes (THMs), the carcinogenic by-products of chlorination. The town’s current water system would no longer meet the standards.

It was once again time for Lunenburg to adapt. Complying with the regulations would mean a complete overhaul of the system, which could cost millions of dollars. It was a tall order for a town of only 2,300, especially since the deadline to implement the new regulations, ?April 1, 2008, was rapidly approaching. To determine what their options would be, Mayor Lawrence Mawhinney and the Lunenburg town council enlisted the aid of CBCL Limited, a Halifax-based multi-discipline engineering firm.

CBCL’s engineers looked into a variety of solutions for Lunenburg’s problem. Relocating the water intake would do nothing for the water quality. Mining for an underground source could turn up uranium, which is common in the area, and laying a pipeline through the bedrock to nearby Mahone Bay’s treatment plant would be prohibitively costly. The only reasonable solution was for Lunenburg to build its own water treatment plant. CBCL considered four main methods of treatment for the plant: conventional treatment, settling, dissolved air flotation, and membrane filtration.

A membrane filtration system uses a series of semi-permeable membranes that allow water to pass through but traps suspended solids. The advantage of a membrane system is that energy use is relatively low and there are few to no chemical additives. While a relatively new technology, it’s generally regarded as one of the highest levels of health protection. It showed the best results for colour, turbidity and organic matter in bench tests and had been used with great success in CBCL projects in Stellarton, Hantsport, and Tatamagouche—three other small towns in Nova Scotia.

Based on its superior performance and the analysis of capital and operating costs for all four methods, membrane filtration was recommended to the town council in the pre-design study report.

Engineers Andrew Gates and Mike Chaulk of CBCL presented the report to the mayor, Lunenburg town council, and Barry Gillis, an engineer with the Bridgewater office of the department of environment and labour, in a public information session on March 26, 2008. The event was attended by over sixty town residents, many of whom expressed major concerns about CBCL’s plan, especially the $7-million price tag. However, CBCL made it clear that while membrane filtration would cost $300,000 more on start-up than their second choice, dissolved air flotation, its lower operating costs would make up the difference in five to ten years. The fact that similar projects in Bridgewater and Mahone Bay had similar final costs further debunked the illusion that a cheaper solution could be found.

The plan for the new and improved Lunenburg water treatment system encompassed the construction of a new plant, enclosing the reservoir, and improving raw and wastewater handling. This, coupled with the town’s plan to continue replacing old cast-iron watermains with modern cement-lined iron and PVC pipe, will completely revamp the water supply system. When it’s completed in May 2010, the treatment plant will have a capacity of 5.3-million litres per day and will require 1.5 persons to oversee operations.

A total of $7 million was required to cover the entire project assuming everything stayed on schedule and within the design parameters. While the multi-million-dollar investment was unavoidable, it raised questions for the town. Namely: where were they going to get the money?

The answer came in the form of provincial and federal funding. Together the two senior levels of government committed to cover two thirds of the total cost, reducing the amount the town of Lunenburg would have to come up with to $2,327,587. Using saved-up federal gas tax revenues and funds from capital surpluses, the town managed to knock off a further $700,000.

The town borrowed the remaining $1.6 million at a payback rate of $54,000 per year for thirty years.  Mayor Mawhinney boiled down the loan to the equivalent of $1.29 per household per day.

CBCL’s plan has been approved by the town and the province. Government funding has been officially secured. In early June 2009, the town council accepted a $6.9-million tender from Mid Valley Construction of Kingston, N.S., and construction will begin later in the month.

With Lunenburg’s late start getting ready for the new regulations, the town will miss the Province’s deadline on water treatment system improvements by more than two years. Ultimately though, when you’re talking about protecting people from water contamination disasters, a late start is better than no start at all.

Katrina Nicholson is a freelance writer based in Sydney, Nova Scotia. She is a graduate of Dalhousie University and the Vancouver Film School’s writing program.