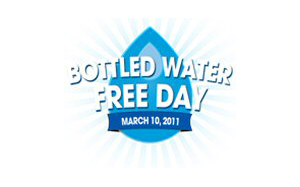 “Canadians are rejecting the privatization of public water resources and pledging to toss the bottle and go back to the tap,” said Paul Moist, national president of the Canadian Union of Public Employees. “While Bottled Water Free Day started in Canada last year, this year it has spread to five continents.”

Organized by the Canadian Federation of Students, Canadian Union of Public Employees, Sierra Youth Coalition, Polaris Institute, and Development and Peace, Bottled Water Free Day aims to raise awareness about the negative impacts of bottled water and the need to defend public water resources and infrastructure.

Meanwhile, the Canadian Bottled Water Association (CBWA) responded with its own message.

“Our industry does not compete with tap water, we’re simply here as an alternative to other packaged beverages,” said Elizabeth Griswold, executive director.

“All students deserve the right to make their own choice, and to have water regardless if it’s from a bottle or a tap because it’s the healthiest choice they can make,” she added. A press release from the CBWA reminded readers that the country’s bottled water industry is “considered a leader in responsible environmental practices,” citing bottle recyclability.

To date nearly 100 municipalities, four municipal associations (including the Federation of Canadian Municipalities), seven school boards, 11 university campuses and countless workplaces have restricted the sale or distribution of bottled water.