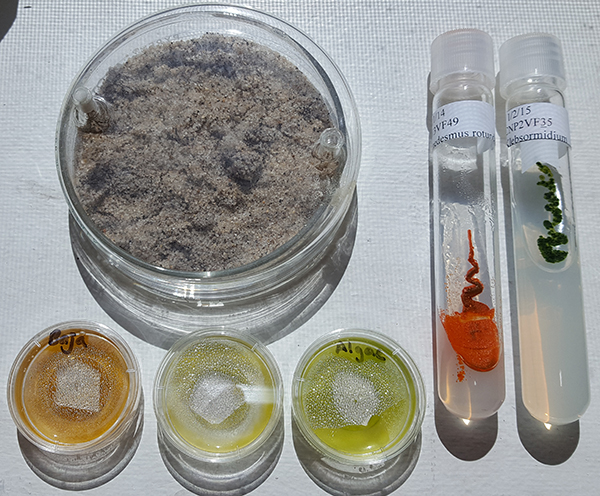 Professor of biology Doug Bruce and colleagues from the U.S. have approached the desert with a life question of their own: how are desert green algae able to survive and even regenerate in places of severe drought? The answer is important for understanding how crops and other plants will cope in a world that’s becoming increasingly warmer and more prone to drought.

The research team hopes to determine how desert green algae has evolved genetically to protect its ability to undergo photosynthesis under very dry, or desiccated, conditions.

Given that agriculture is the number one consumptive use of water in both Canada and globally, and with warming temperatures globally—understanding how the desert algae has evolved genetically, could have applications for growing food.

The researchers explained that desert green algae live in “desert crusts” on the ground’s surface that contain a host of microorganisms. These crusts stabilize desert soils, increase water filtration and add nutrients to the soil.

Normally, plants need water to undergo photosynthesis, a process in which the plant converts sunlight and carbon into sugars used for energy. If deprived of water for a certain amount of time, plants may still look green but are unable to complete the process of photosynthesis, and over a longer period of time, the plant eventually dies.

Bruce said, “If you took a piece of lettuce and you dried it out completely and put it in the sun, it would bleach out. In no time, the pigments would be destroyed; photosynthesis would be over. You can pour water over it to bring it back to life, but it’s not going to happen. But, desert green algae has this trick of protecting themselves, so they can survive desiccation and then in the presence of water, come back to pretty-much instantly do photosynthesis.”

Scientists believe that these terrestrial plants evolved from a single green algal ancestor that came from the water and was able to successfully thrive on land.

But certain types of algae such as desert green algae did not come from that same ancestor and evolved independently of what was to become plants. Bruce and his colleagues are looking at similarities and differences in the traits of terrestrial plants and green algae.

“One of the aspects of this would be to try to determine if these other lines of green algae that have now shown the ability to withstand desiccation and see what they may have that our crop plants have long, long, since lost or never had at all,” he said.

“Is there a way, then, to think about making crop plants potentially more desiccation-tolerant or at least be able to have some more drought resistance?”

Photo of several algae isolated from desert microbiotic crusts in the southwestern U.S. These two algae were isolated from crust at the Sevilleta in New Mexico, and Canyonlands National Park in Utah as part of a National Science Foundation-funded biotic survey project conducted by Dr. Louise Lewis (University of Connecticut) and colleagues over a decade ago.