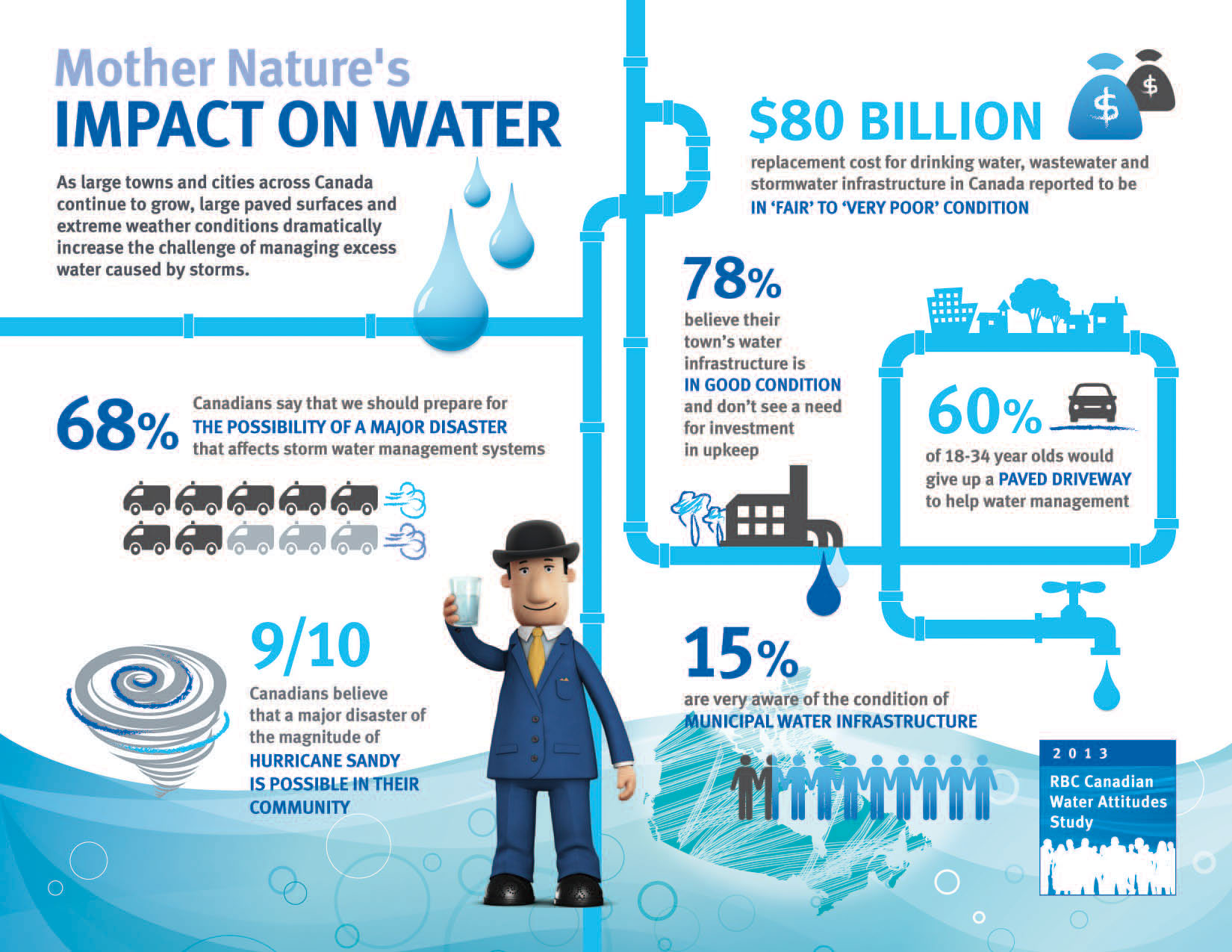 Canadians are concerned about the possibility of extreme weather disasters, but few are worried about the strain these events will have on municipal water systems, says the latest RBC Canadian Water Attitudes Study. Of 2,282 participants, 68 per cent said that we should be prepared for the possibility of a major disaster that affects storm water management systems, but the majority of Canadians are not urgently concerned, with only 19 per cent believing that “major actions are required now.”

Rain and snow storms can have a particularly drastic impact on towns and cities across Canada because of the high proportion of paved surfaces, which cause runoff to burden water management systems. According to Bob Sandford, chair of Canadian Partnership Initiative of the UN Water for Life Decade, extreme storms have a direct impact on water, as stormwater runoff can drag contaminants into local waterways and pollute water bodies that are important for recreation and water supplies. “All the impermeable surfaces in cities create the ideal condition for excess water to overwhelm our already strained municipal stormwater systems,” he says.

But few Canadians see, or are concerned about, the link between pavement and pollution. This year’s survey reveals that only seven per cent have replaced paved surfaces with alternatives such as interlocking stone or gravel that allow rain and snow to soak into the ground instead of becoming pollution-tainted runoff. And only 12 per cent said that they would make such a replacement in the future.

The survey notes that for 47 per cent of Canadians a paved driveway or yard is part of their vision of an ideal home. “Canadians continue to have a love affair with paved driveways, and there’s a serious trickle-down effect,” says Sandford. “With impermeable sidewalks, roadways and parking lots added to the mix, we’ve actually created the ideal condition for excess water to overwhelm our already strained municipal water and stormwater systems.”

In addition to the burden caused by all this pavement, Sandford warns about another problem. “In most cities across Canada, infrastructure is crumbling and in urgent need of replacement or repair,” he notes. But the survey indicates that the public is unaware, with 78 per cent believing that their municipal water infrastructure is in good condition. A large majority (80 per cent) of Canadians are also unwilling to pay for stormwater management system upgrades.