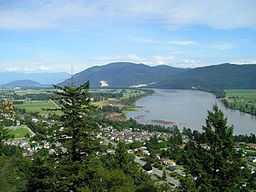 The Government of British Columbia released two reports concerning flood risk along the Fraser River on July 11. The reports can be used to support flood risk management,floodplain development, and dike upgrade planning.

The first report, Fraser River Design Flood Level Update–Hope to Mission, compares design flood levels with crest levels for 15 dikes in the Hope to Mission reach. Many of the dikes in question were built in the 1970s and 1980s, and were designed to cope with the largest flood flow on record from 1894. The investigation found that, despite some upgrades since their construction, all but one of the 15 dikes is too low. As a result, efforts will be needed to protect the upper Fraser Valley from flooding.

The second report, Simulating the Effects of Sea Level Rise and Climate Change on Fraser River Flood Scenarios, investigates how climate change-related sea level rise and increased flows would affect flood levels along the Fraser. It suggests that large floods will become increasingly common as a result of climate change, and that by the end of the century, 50-year floods may be similar in magnitude to floods that have a current return period of 200 or 500 years.