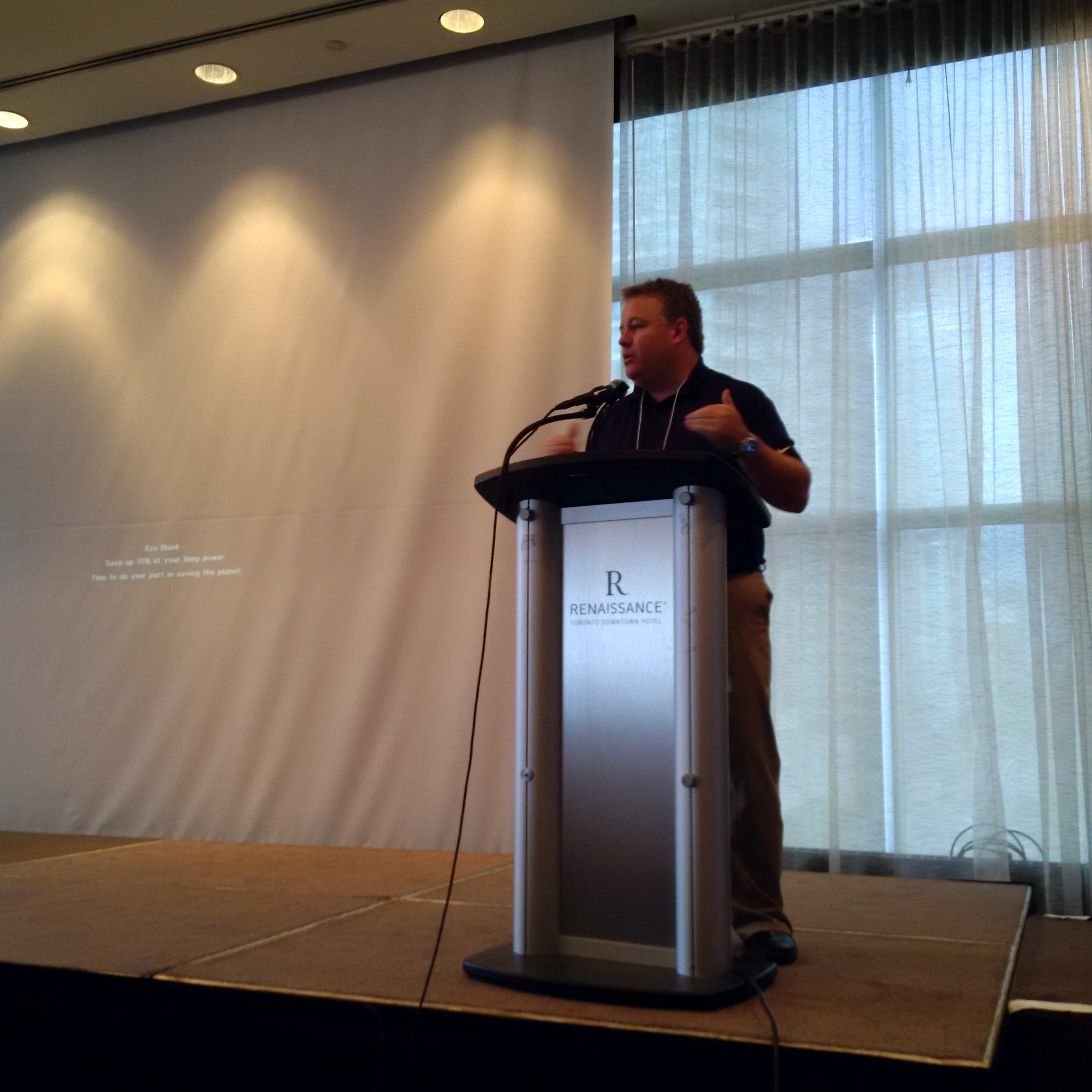 David Henderson, founder of investment firm XPV Water Partners, spoke at a workshop today that focused on moving Ontario’s water sector into the era of the digital utility.

Henderson delivered a short a punchy presentation that focused on a three recommendations:

Below is a transcript of Henderson’s ideas:

My first very controversial point for you is this: using the word “smart” [as it relates to smart water] is really dumb. Drop the “smart.” There are too many smart cities, smart devices, and smart people. Never underestimate the power of language. Having a wastewater plant versus having a recycling, or reclamation, or New Water plant—these words shed a much different perspective of the industry on the world. It should be “digital water.”

We have to start asking utilities and industrial end users, what are the outcomes that they are looking for in terms of their processes, and what are they really willing to spend on? If we are going to build a digital water consortium here in Ontario, you have to realize that the direction it will take is out of your hands.

I saw the transformation of telecommunications industry over a 10 to 20-year period. I gotta’ tell you, I started in 1991 back when email was just starting to get hot and Lotus Notes was a new tool. Today we carry handheld devices that are more powerful than the biggest mainframes from back then—just think about that.

We cannot think about the change that’s needed this year. You need to think about it in ten year periods. The change is coming and it’s being influenced by all the outside sources that you don’t even see; research by the Ubers of the world, machine learning, artificial intelligence. These technologies are being developed for other industries by the billions of dollars.  Water process is very well aligned with some of those technologies because it’s a linear process. So things like, machine learning are very conducive to water.

Need for a digital asset fund

We are a $400 million [water] fund—the largest in the world. You will see the vast majority of our investments are going into this area, so I am putting my money where my mouth is. This is the future of the industry and I think if we don’t get our heads around this in Ontario, we are going to lose a massive opportunity.

The big thing that I think we should for is a digital asset fund.  We have asset funds for pipes and pumps and all sorts of stuff, but there’s nothing in the books, or regulation, or funding mechanisms that will allow municipalities—in particular utilities—to buy digital assets. Which by the way, will be the most important assets that utilities procure over the next ten to twenty years.

We should focus our messaging to the government on this need. They are about to spend billions of dollars on pipes and things, and that stuff is important and good and we need that. And then they will ignore [these digital assets] which I think will eliminate a bunch of the spending that they currently believe they need to do. There is a lot of misconceptions. Once you have the correct digital assets, it’s amazing how that impacts your decision making.

We have a company, FATHOM. They are growing at ten times the industry average right now. That’s their growth rate. That is a sign, in the other worlds like telecom and the rest, of massive inflexion. Ten times water industry growth is not the same as Uber, but it’s the ratio that counts. [FATHOM] are a big digital platform, mainly for your meter management and up the CIS chain, and they get full city data.

You know what they are discovering? Up to 30 to 50 per cent of all leaks are digital leaks. Wrong meter, no meter, broken meter. But that, much like non-revenue water, shows up as a leak. They are finding that it’s not. it’s just a bad digital outcome. And because they are collecting the data and running the algorithms, they have discovered this. Think about the implications of that. It may not be true across all the digital networks, but that’s still a big number. Consider the implications even if it was 10 or 15 per cent. Think about what that does for infrastructure spending and budgets and focus. I think this is just the beginning.

We need to leverage our Ontario strength. Ontario is one of the most abundant regions when it comes to digital technologies, and I’m not just talking water. You may not know this, but the [University of Toronto] Creative Destruction Lab is now number one in the world in machine learning and artificial intelligence. Apple just offered $100 million to the top three guys at U of T to move to California. That’s the talent base that you have sitting in your backyard.

Ryerson [University]’s Social Media Lab is one of the top performing app development labs in North America. There are others like Waterloo University that have a long history of being the top software and engineering institutions. So what I think we need to do, we have to play to our strengths. The rest of the world has woken up to this and I can talk for an hour about what other cities and groups are starting to do in areas like San Francisco and other places in the world are doing. But I can tell you this: I think we are going to miss a big opportunity if we don’t get on it, get focused, and take advantage of it.

David Henderson is the founder of XPV, is an investment firm that manages over $400 million USD of investment capital with a focus on the water and wastewater companies.

The outcomes of the workshop will be the subject of a report to be released by the organizers.