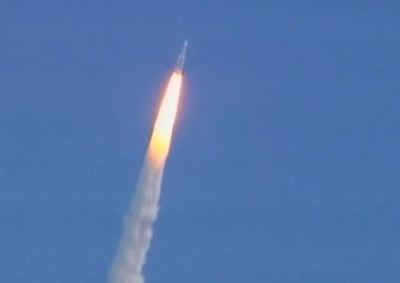 Michel Fich is looking for water in space.

This morning, the University of Waterloo professor of physics and astronomy celebrated the successful launch of the Herschel Space Observatory and Canada’s contribution to the study of the birth of planets, stars and galaxies.

Launched this morning from Kourou, French Guiana, Herschel is the largest telescope ever put into space, with a diameter of 3.5 metres. Dubbed the Hubble of longwaves and built by the European Space Agency, Herschel will investigate the history of how stars were formed and study how they continue to form in our and other galaxies.

“Herschel will be a major space observatory, much like the Hubble Space Telescope, though working at the longer wavelengths of light, where the processes creating planets, stars and galaxies become visible,” said Fich. “Canadian astronomers will use the Heterodyne Instrument for the Far Infrared (HIFI), a high resolution instrument on Herschel, to make the first detailed studies of water, the basic molecule of life, in all of these parts of the universe.”

Fich worked with Cambridge-based COM DEV International to build a local oscillator source unit, a key-subsystem in HIFI, with funding from the Canadian Space Agency. Canada’s contribution has earned its scientists access to Herschel.

Fich leads a team of some 30 astronomers from institutions across Canada who will use HIFI to search for water in deep space. They will look for the H2O chemical signature in extremely young solar systems, in dense interstellar clouds where stars are just beginning to form, and in other galaxies. HIFI will also be used to study many other simple molecules in the first detailed astrochemistry mission in space.

Herschel will be deployed 1.5 million kilometres from Earth, four times further away than the Moon. HIFI is one of three highly sensitive instruments kept at temperatures close to absolute zero using liquid helium. The mission will end when the helium is exhausted, probably after about four years of operation.