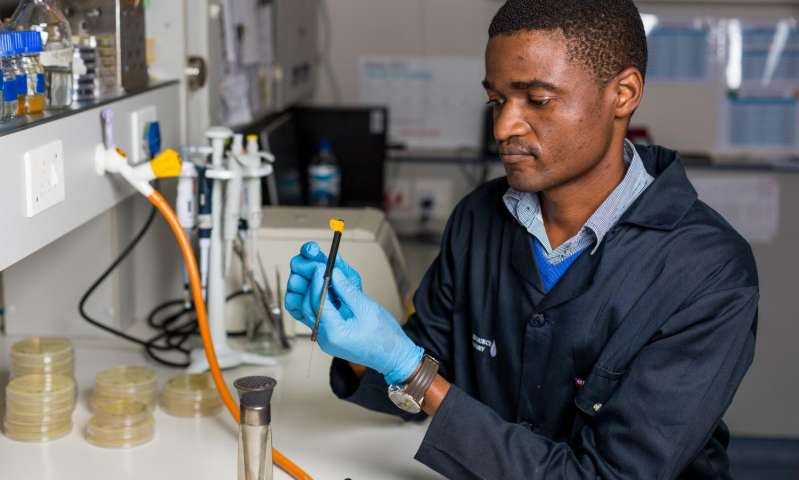 Biosurfactants are compounds produced naturally by bacteria, fungi or yeasts and they have been commercially utilized in shampoos, shower gels, and household cleaning products. They are also used in food, agriculture, cosmetic and medical industries as well as in environmental bioremediation to prevent the spread of spoilage and disease-causing bacteria.

“The biosurfactants produced by the two bacteria in my study prevented the growth of major disease-causing bacteria such as methicillin-resistant Staphylococcus aureus and gentamicin-resistant E. coli which can lead to life-threatening infections in humans,” said Dr. Thando Ndlovu, a postdoctoral researcher at Stellenbosch University, Faculty of Science.

“This finding is promising given worldwide reports on the number of deaths caused by antimicrobial resistant microorganisms that are becoming increasingly difficult to treat with current drugs.”

“The discovery of novel antimicrobial compounds is a priority and biosurfactant compounds could be used to develop new antibiotics for treatment of various infections caused by antibiotic resistant bacteria and eventually replace ineffective antibiotics in future.”

Ndlovu said his study showed that municipal wastewater is ideal for the isolation of diverse biosurfactant-producing bacteria that could be utilized in the production of such compounds for commercial use.

“Biosurfactant-producing bacteria thrive in polluted environments such as contaminated soil or water. These bacteria also have the ability to outcompete other bacteria in the same environment because the biosurfactant compounds help them to absorb nutrients and to protect them from toxic materials.”

Ndlovu adds that biosurfactant compounds can be used to reduce the use of synthetic antimicrobial agents for various purposes such as cleaning and coating agents to prevent the build-up of disease-causing and spoilage bacteria.

As far as future research is concerned, Ndlovu says he is now focusing on the application of biosurfactant compounds with antimicrobial properties.

See the academic paper published in the U.S. National Library of Medicine National Institutes of Health.

This story was originally published by the Stellenbosch University.