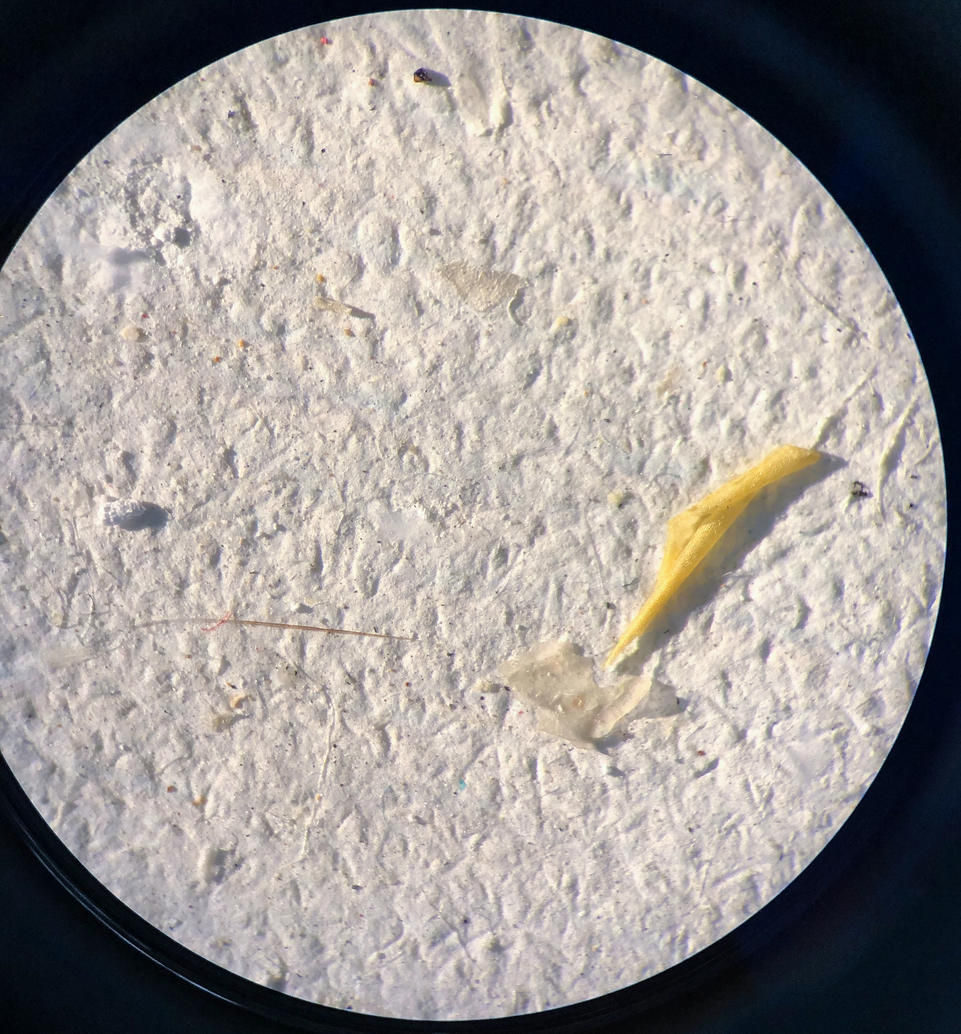 Plastic pollution is a serious and growing problem across the globe. Understanding microplastics, and how to reduce or eliminate their presence in our ecosystems, is a priority for researchers and governments alike.

Paige Jackson, an undergraduate student in the Department of Biological Sciences at the University of Calgary, spent her summer researching microplastics in a tertiary wastewater treatment facility.

“My project was a combination of things I’m personally really interested in,” said Jackson. “Plastics and the zero-waste lifestyle are both really interesting to me. Plastic pollution—particularly marine microplastics—is fairly widely studied. While doing a literature search as part of a previous summer research assistant position, I didn’t find a lot of literature about microplastics in wastewater.”

To conduct her study, Jackson collected wastewater samples from three different locations within a tertiary wastewater treatment plant. The first was raw influent, meaning untreated wastewater. The second was final effluent—fully treated wastewater—and the third was from biosolids (settled material from the biological treatment process). Biosolids ended up being of particular interest to Jackson.

“I thought I would find a lot of the microplastics here,” said Jackson.

She digested the samples using 50 per cent hydrogen peroxide to remove the organic matter, leaving the microplastics remaining. The influent and effluent samples were filtered to remove larger particles, while leaving behind only tiny pieces of microplastic, ranging from 250 microns to five millimetres.

“I haven’t found the perfect word to describe the biosolids,” Jackson said, “but they were kind of clumpy and thick. It wasn’t going to be practical to sieve, so I put them straight into a beaker with the peroxide. The sample digestion took a varying amount of time, depending on the sample type. The influent and final effluent were pretty quick, but the biosolids took days, and needed larger volumes of hydrogen peroxide added.”

Jackson then dried, sorted, and counted the pieces of microplastics under a microscope and converted the counts to per litre abundances to allow for statistical analysis.

“The six plastic types that I looked at were fibres, fragments, foams, films, micro beads, and nurdles, which are also called pellets. These are the six most common and most agreed-upon types of plastic.”

Microplastics are now considered an emerging contaminant. As wastewater treatment plants are not designed to remove microplastics, Jackson says that it was no surprise to see them present in her samples.

One of the most abundant types of microplastics in the water was fibres in the influent, which would come from washing clothing like fleece. Microbeads, which started to be banned in personal care items from Canada in 2018, likely came from older personal grooming products such as hand soaps and toothpastes, or industrial processes.

“Another significant source of microplastics in rivers that’s been discovered more recently is the urban environment, such as when there’s a big storm that creates runoff from the road—things like tires and asphalt get into the stormwater and then enters rivers,” Jackson explained.

Jackson’s research found that from among the microplastics left after going through wastewater treatment, only one per cent of all counted microplastics exiting one of those two areas were in the final effluent. The remainder—99 per cent—was present in the biosolids.

“When you are looking in a unit of plastics per litre, one per cent can sound small,” said Jackson. “But when you look at how many litres of wastewater a treatment plant treats on a daily basis, that one per cent actually becomes pretty large.”

Jackson says the research experience she was able to participate in as an undergraduate student was enhanced by the facilities available through the University of Calgary.

As Jackson continues her undergraduate studies, her future research will investigate the possible connections between the role of microplastics in antimicrobial resistance and wastewater.

“Wastewater treatment plants are a really great place to do this type of research because they collect water from municipal and industrial sources, all passing through one facility,” said Jackson. “It’s really a great place to go and look and see what’s there. I’ve also been fortunate enough to have sampled advanced tertiary membrane-based treatment modules at ACWA, which is allowing me to determine if membranes might be a good option to remove microplastics during wastewater treatment.”