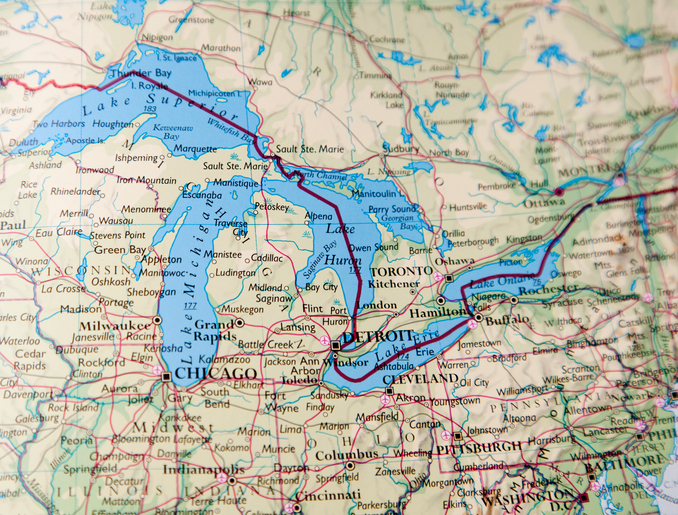 At the Great Lakes and St. Lawrence Cities Initiative annual conference in Ajax, Ontario, Canadian and US mayors celebrated the strong, integrated relationship on environment and economy between our two countries and the Great Lakes St. Lawrence region as a whole. The mayors cautioned against isolationist policies towards trade and environmental protection.

“As mayors in the Great Lakes St. Lawrence region, we represent a community of common interest, dedicated to the protection of our shared waters and our integrated economic prosperity,” said incoming Cities Initiative chair Sandra Cooper, Mayor of Collingwood, Ontario.

“The mayors of the Great Lakes and St. Lawrence region are the keepers of the flame of our special cross border relationship,” said Paul Dyster, mayor of Niagara Falls NY and immediate past president of the Cities Initiative. “American mayors of the Cities Initiative stand shoulder-to-shoulder with our Canadian cousins in the face of escalating rhetoric that threatens to damage 200 years of peace and economic prosperity in the region.”

Also at the conference, civic leaders announced the creation of the Mayors’ Council on Nature and Communities, an exciting new venture to create natural spaces in urbanized areas and contribute to national efforts to reach the UN Convention on Biodiversity 17 per cent natural spaces target by 2020. The initiative will begin in Ontario as a regional pilot, chaired by Mississauga Mayor Bonnie Crombie, with vice-chair Mitch Twolan, Mayor of Huron-Kinloss.

The first meeting of the Mayors Council on Nature and Cities was held at the annual gathering of mayors and other advocates for the Great Lakes and St. Lawrence. At the meeting, member mayors agreed to identify existing protected spaces, create new ones, and determine how to connect them to better protect habitat and migratory pathways in the Great Lakes and St. Lawrence region.

“Connecting nature to people, and people to nature is the best antidote to our fast-paced and screen-addicted lives,” said Crombie. “People don’t need to drive long distances to experience nature when it can be found right in our own backyard. Natural spaces nurture our mental health, make our cities more resilient to climate change, and can support species habitat and migration through the region.”

The Mayors’ Council will work in coordination with national efforts to meet the target under the international Convention on Biodiversity, to protect 17 per cent of land and freshwater by 2020.

“Wetlands and naturalized shorelines are critical habitat for so many of our indigenous species in the Great Lakes St. Lawrence Region,” said Suzie Miron, Councillor from the City of Montréal and representative of Mayor Valerie Plante, Cities Initiative board member, “As mayors, we need to find ways to naturalize our shorelines and connect terrestrial habitat and migratory pathways throughout the region.”

Funding for Strategy to Reduce Phosphorus Loss into the Thames River...