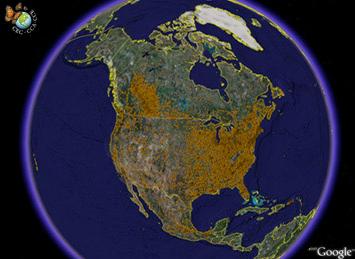 Over 228 million kilograms of direct pollutant releases to surface waters were reported by industrial facilities in North America in 2006, while a minimum of 133 million kilograms of pollutants were transferred to sewage and/or wastewater treatment systems, says a new report from the Commission for Environmental Cooperation (CEC).

The report reveals that just two of the 256 pollutants released to surface waters made up 90 per cent of the total volume: nitrate compounds and ammonia. These pollutants are associated with the increased presence of nuisance and even toxic algal blooms that result in aquatic dead zones, or areas depleted of oxygen, increasingly affecting water bodies throughout the three countries.

The information on releases to surface waters also reveals significant gaps in the tracking of North American industrial pollution as a result of national reporting exemptions for certain sectors and pollutants, combined with incomplete reporting by some facilities, says the report. For example, public wastewater treatment plants accounted for 44 per cent of the total reported releases, but the data come almost exclusively from Canadian facilities. In the United States, the public wastewater treatment sector is exempt from PRTR reporting and in Mexico, very few such facilities reported in 2006. Moreover, nitrate compounds and ammonia, the pollutants released in largest proportions by Canadian and U.S. facilities, are exempt from reporting in Mexico.

Two case studies examine pollutant releases to the Columbia River and the Rio Grande/Río Bravo bi-national watersheds and highlight pollutants of special interest, including toxic metals such as lead, chromium and mercury and their compounds. For the first time, combining the CEC’s watershed map layer with integrated North American PRTR data makes it possible to pin-point sources of reported pollution impacting each of these shared river systems. The report shows, for example, that the majority of reported releases of two toxic metals, mercury and lead, to the Columbia and Rio Grande/Río Bravo, are from sources in Canada and Mexico, respectively.

Deloitte Report: The Era of Cheap Water is Over