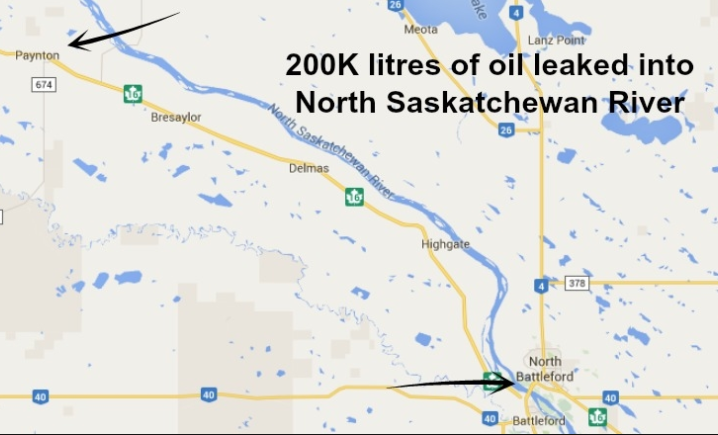 Husky Oil has released a report that would suggest the cause of the pipeline leak that spilled 90,000 litres of crude into the North Saskatchewan River was related to slope instability and ground movement due to heavy rain.

In its post mortem, the company provided a geotechnical investigation developed by Stantec, as well as recommendations for internal practices to the provincial government. The report stated, “The break occurred on land, approximately 160 metres from the riverbank on the south slope of the river. An estimated 225,000 litres of crude blended with condensate was released from the pipeline and about 40 per cent of this entered the river.” It noted that the company detected the leak on the morning of July 21 and that ground movements of this sort are not uncommon to the area.

The pipeline, known as 16TAN, constructed in 1997, shares the same trench as another pipeline, NPS8 that runs down the North Saskatchewan River and crosses the river as a bundle that was installed using horizontal drilling methods.

In a brief that accompanied the Stantec report, Husky has said that the company will implement measures to improve the transmission system, including ensuing geotechnical risks are are addressed and reassessed over the lifetime of a pipeline, application of additional safety loading factors, and reviewing existing leak detection processes and procedures.

Saskatchewan’s Energy and Resources Minister Dustin Duncan said officials would consider the Husky report in the provincial investigation, to be completed some time in early 2017.

In a statement posted online in response to Husky pipeline report, environment critic Cathy Sproule said, “In light of the report from Husky on its pipeline spill, we are reaffirming our call to move away from having companies police themselves when it comes to pipeline inspections. The spill showed how devastating an incident like that can be to the water that many families drink and use in everyday life, but it also showed what little work is being done by the Sask. Party government to make pipeline safety a priority. The government only conducted 78 pipeline inspections last year, while the government of Alberta conducted more than 2,000. That will have to change moving forward.”

In the November/December issue of Water Canada, the Canadian Energy Pipeline Association describes voluntary measured it is taking with member companies to ensure water protection.

BC Proposes Policies for Protecting Watercourses from Livestock Watering