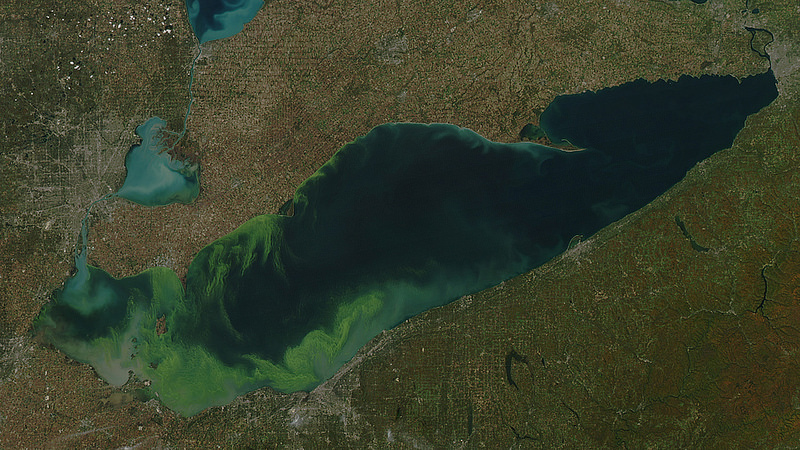 Using data from NASA’s Landsat 5 instrument, scientists Jeff Ho and Anna Michalak, along with colleagues, have made new advances in understanding the drivers behind Lake Erie’s toxic algal blooms and their implications for lake restoration.

With the data, the researchers generated new estimates of historical algal blooms in Lake Erie, more than doubling the number of years previously available for scientists to investigate, from 14 to 32. The researchers discovered that decadal-scale cumulative phosphorus loading—that is the runoff that enters the waterway—helps to predict bloom size in addition to the effects from same-year phosphorus inputs. The work suggests that it may take up to a decade to reap the benefits of recently proposed nutrient loading reductions.

Study co-author, Anna Michalak, said of the findings: “The results of our studies suggest that phosphorus trapped in lake sediments continues to be re-released into the lake for several years, feeding blooms year after year.”

The urgency of Lake Erie’s algal bloom problem prompted the development of new phosphorus targets from the bi-national International Joint Commission in 2016. The new targets are an important step in safeguarding Lake Erie’s water, but recovery is likely to take several years even after the amount of phosphorus entering the lake has decreased.

Michalak and study lead author, Jeff Ho, were motivated to embark on their research after realizing that all current efforts to model toxic blooms in Lake Erie were based on fewer than fifteen years of data. As such, the team looked at the Landsat 5 archive, going back to 1984. Using a newly developed method based on multiple metrics of bloom presence, distribution, size, and timing, they evaluated eleven candidate Landsat algorithms and found the one that best matched existing data for recent years.

“This multi-metric approach for identifying the best bloom-detection algorithm gave us a comprehensive picture of each algorithm’s strength and weaknesses,” said Ho.

With these new bloom data in hand, the researchers explored relationships between bloom severity and water inputs, especially phosphorus. The findings suggest that the impacts of internal loading are greater than previously thought.

“The cumulative phosphorus load, indicative of long-term trends in bloom size, was the key to understanding why some blooms had occurred during years with very little spring phosphorus runoff,” said Ho.

Michalak concluded that, “The path ahead for Lake Erie is clear—we have to reduce the amount of phosphorus flowing into the lake. And we will need to be patient to give the lake time to recover.”

The findings were presented in two publications: Using Landsat to extend the historical record of lacustrine phytoplankton blooms: A Lake Erie case study and Phytoplankton blooms in Lake Erie impacted by both long-term and springtime phosphorus loading.

New Research Aims to Support Recovery of Fish at Risk of...