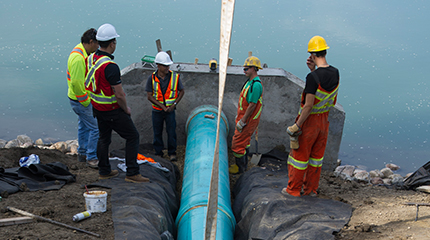 As Edmonton City Council prepares to vote on the transfer of the city’s drainage utility to EPCOR, a report from the Edmonton and District Labour Council (EDLC) has challenged the benefits of the proposed transfer, claiming the public utility could achieve much of EPCOR’s proposed efficiencies.

Described as an exercise in weighing trade-offs, the EDLC’s report lays out factors that it believes city councillors and members of the public should consider before granting approval to the transfer.

Authored by Robin Shaban, a researcher and policy analyst, and Barrett Weber, a consultant, the report points to two factors that the EDLC believes should be considered by city councilors, which include the efficiencies that EPCOR has suggested will result from the transfer and whether the city could achieve the same efficiencies. The report also questions issues of transparency and accountability.

EPCOR’s proposal indicated that it could reduce drainage operating costs by $5 million over 5 years. Further, EPCOR’s proposal suggests it would deliver lower drainage rates than the city and that it has sufficient finances to address system growth, aging infrastructure, and flood mitigation. And, ultilatemy, it EPCOR stated they will be able to generate and sustain an additional $20 million to the annual dividend. In 2015, EPCOR paid the City a $141 million dividend.

In response, EPCOR spokesperson Tim LeRiche told the CBC, “We are prepared to meet any requirements of city council in regards to transparency and accountability.” LeRiche also encouraged councilors and citizens to read the 2106 EPCOR Proposal for Drainage Transfer Analysis, which was conducted by Grant Thornton. The Grant Thornton report found that “Based on the analysis presented in this document, EPCOR’s Proposal to transfer Drainage continues to have the potential to yield net benefits to the City, taxpayers, and ratepayers.”

Both the Edmonton and District Labour Council and the Grant Thornton reports are available online.