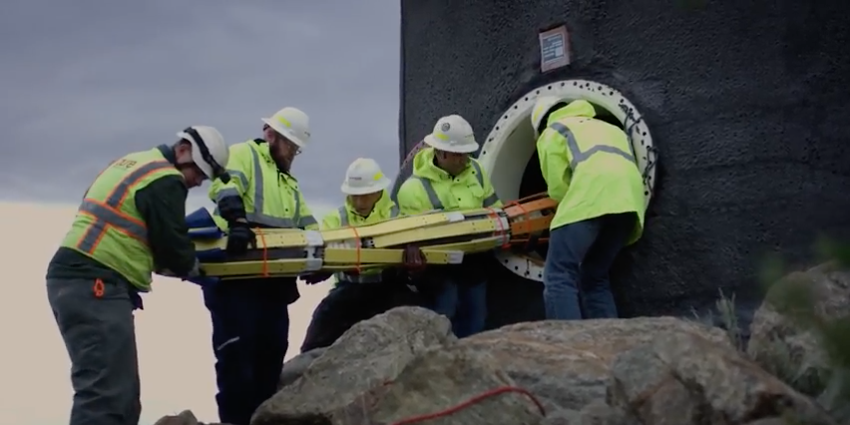 Pure Technologies recently completed the longest, single deployment of its PipeDiver inspection platform to date on a critical water pipeline that runs over 70 kilometers through the Rocky Mountains of Colorado.

Colorado Springs and the City of Aurora are the second and third largest communities in the state of Colorado. The Homestake Water Project is a joint venture between the two cities to transport water between the communities that serve almost 1 million people.

The Homestake Water Project includes a collection system, a series of reservoirs, a tunnel that brings water through the continental divide and a pump station that helps deliver up to 120 million gallons of water per day.

One of the pipelines managed by Homestake includes the 70-km Otero Discharge Pipeline, a large diameter (66-inch) non-cylinder prestressed concrete pipeline (PCP) built in the early 60s. The line, which provides 60 to 70 percent of the water to Colorado Springs and Aurora, is in a high-risk location, with few roads and steep inclines, and recently the pipeline has suffered major failures.

Beginning ten years ago, over a five-year period, Homestake shut down the Otero Discharge Pipeline each September to perform a condition assessment on certain sections of the pipeline. The shutdown included two weeks just to drain the pipeline to prepare it for a manned electromagnetic inspection tool, and another two weeks to perform the inspection. Pure’s PipeDiver tool was selected due to its ability to deliver high-resolution data on this critical pipeline without the need for dewatering, a significant time and cost saving while improving safety for those involved in the inspection.

“As the pipeline slices through the Rocky Mountains, safety is a major issue because of the rough terrain,” said Tom Hankins, Supervisor for Homestake Water Project. “This task is hazardous, not just to the mobilization crews, but also to the inspection teams inside the pipe who required rope support on the steep slopes.”

The proposed inspection was a technically challenging, high-risk project. The teams put more than six months of planning into the inspection logistics, and Pure Technologies worked closely with Homestake to ensure existing facilities would be used for the tool’s insertion and extraction.

At over 70 kilometres long, the PipeDiver inspection was recognized as the longest single-day run for the tool in the history of the Company. Homestake will soon have critical information on the areas of concern on the pipeline, which in turn, will drive repair/replacement decisions for the proactive water authority.