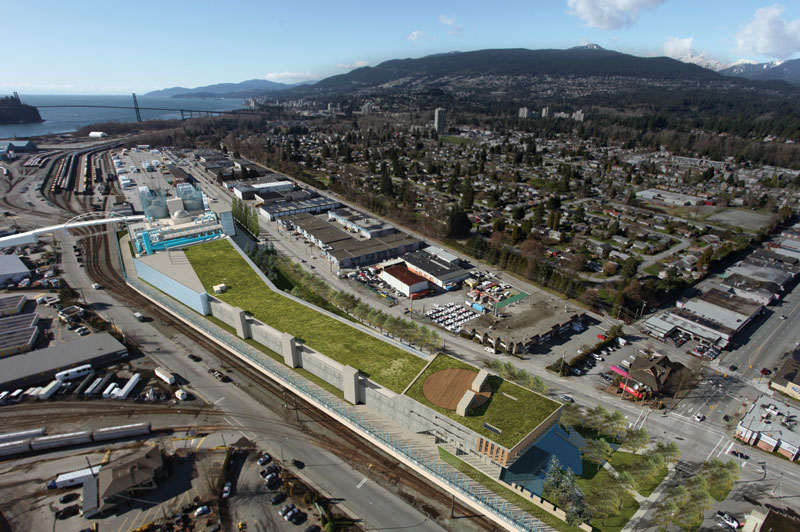 The governments of Canada and British Columbia have announced their funding for the Secondary Wastewater Treatment Plant at the Metro Vancouver Lions Gate treatment site.

On March 11th, Jonathan Wilkinson, Member of Parliament for North Vancouver, on behalf of Canada’s Minister of Infrastructure and Communities; Peter Fassbender, Minister of Community, Sport and Cultural Development joined by Greg Moore, chair of the Metro Vancouver Board of Directors, announced joint funding of up to $405 million towards the construction of the Lions Gate secondary facility. The total projected cost of the facility is approximately $700 million. It will be relocated from the Squamish Nation Reserve to a new Metro Vancouver-owned site in the District of North Vancouver, former .

“With considerable funding from all levels of government, we can move ahead with this new robust and sustainable treatment plant, which will replace the primary facility that has served the North Shore for the past 55 years. The Lions Gate Secondary Wastewater Treatment Plant will incorporate leading-edge technologies in integrated resource recovery, greenhouse-gas reductions and energy use, while serving as a critical community asset for the next generation of residents and businesses on the growing North Shore,” said Moore.

The federal government will provide up to $212,300,000 in funding for the project under the Provincial-Territorial Infrastructure Component-Nation and Regional Projects, approximately a third of the total cost. The provincial government will be providing $193 million for the project. The remainder of the funding will be provided by Metro Vancouver.

The new treatment system will be designed to employ best practices for wastewater treatment and resource recovery and reduction of the plant’s carbon footprint. Water will be conserved and reclaimed within the plant and rainwater harvested for reuse. Both indoor and outdoor spaces will be created to support various types of community activities such as education programs, outreach activities, and public meetings.

Once completed, the secondary treatment facility will better support the districts of West and North Vancouver, the City of North Vancouver, and the Squamish Nation with an improved wastewater system that will achieve higher environmental outcomes and also accommodate future growth and economic development throughout the area.

Water Canada continues to report on the developments of the Lions Gate facility, one of the largest wastewater treatment projects in Canada. Read our 2015 breakdown of the project in Canada’s Top Water Projects for that year. Get a copy of our Jan/Feb 2016 issue, The Big Six, to learn more about Canada’s largest water infrastructure projects in 2016.