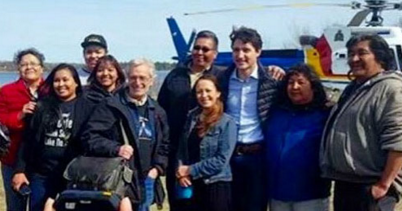 The visit was prompted by an invitation by VICE Media, a multinational television channel brand that targets millenials. VICELAND is filming a documentary on the conditions within Shoal Lake, including a 17-year boil water advisory—one of the longest in Canada.

In December 2015, the federal announced its commitment with support from all three levels of government to share the costs, up to $1 million each, for the design work of Freedom Road to provide access to the mainland. That access was cut off when Winnipeg constructed the aqueduct for its water supply a decade ago.

In a statement to the Prime Minister, Shoal Lake 40 chief Erwin Redsky said, “Mr. Prime Minister, we thank you for coming to share this day with us. You have seen and heard a lot and you have been generous with your time and your availability to our people. It’s appreciated because their daily reality has been ignored for a very long time.”

The chief added, “I have to warn you that […] water delivery in Shoal Lake 40 is not a career opportunity.”

Freedom Road is a proposed, 28-kilometre all-season road connecting the Shoal Lake 40 First Nation to the Trans-Canada Highway for a total estimated investment of $30 million.

Federal documents show taxpayers have spent at least $1.3 million since 2000 to provide the community with bottled water.