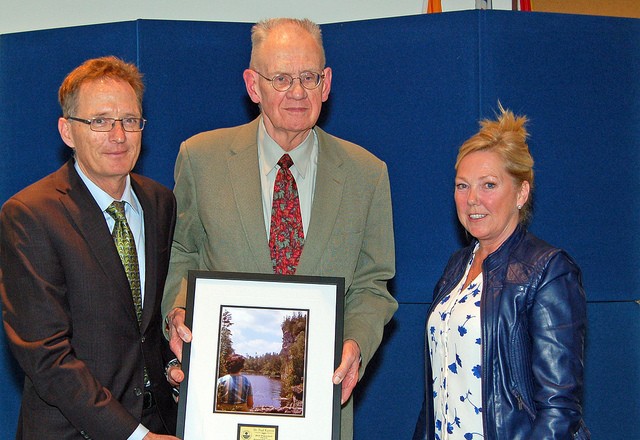 Paul Karrow has received a Watershed Award from the Grand River Conservation Authority (GRCA) for his 60-year career contribution to watershed research in the Waterloo moraine.

Karrow, a distinguished professor emeritus at the University of Waterloo, was among those who received a 2016 Watershed Award from the GRCA.

After six years employed as a geologist for the Ontario government, Dr. Karrow took a position in the civil engineering department at the University of Waterloo. From there, he developed the geology department that became Earth and Environmental Sciences.

With help from his students, Karrow mapped the surface geology in much of the Grand River watershed. Travelling by truck, they stopped every kilometre or so to dig into the ground. They were checking to see whether the sediment at that location was clay, sand, silt, gravel or other materials. In this way, they characterized the array of sediments that lie on top of the bedrock. Karrow’s work as a sedimentary geologist extended well beyond the Grand River to other parts of Canada.

“Understanding the underlying geology in a watershed is fundamental to understanding and modeling how water flows through and infiltrates into the landscape,” said Dwight Boyd, the GRCA’s Director of Engineering, who has a strong appreciation for the work that Karrow has done.

He also worked closely with the geologist who recently updated the surface geology and created 3D mapping of the Waterloo moraine.

“His guidance, and never-ending patience has enabled many students to build upon his work,” said his former student Cam Baker, a former manager at the Ontario Geological Survey for many years and now works at Matrix Solutions Inc.

The Watershed Award has been a program of the GRCA since 1976.