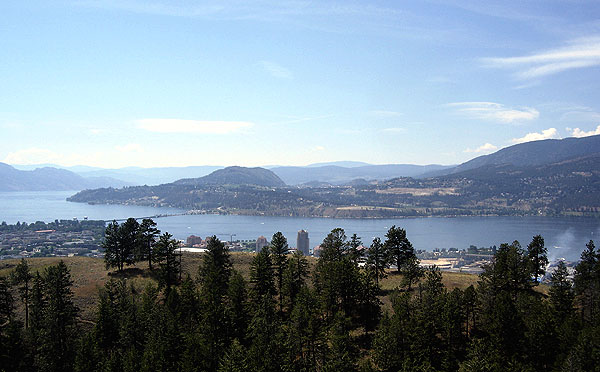 A computer model developed to determine the amount of water resources required for agricultural land in the Okanagan now and in the future is helping identify, develop, and protect long-term agricultural water supplies.

“The agriculture industry is a significant water user in the Okanagan valley and that usage needed to be identified to examine the big picture of water resources for the area,” said B.C. Minister of Agriculture and Lands Steve Thomson. “The Agriculture Water Demand Model allows data to be calculated so decisions can be made about water consumption on orchards and farms.”

In 2005, the Canadian Water Resources Association conference held in the Okanagan identified the need to develop a water supply and demand model to determine how much water was available for use in the valley, what is currently being used and how much water was left to allocate. Since agriculture was the big water user in the valley, the Province determined that an agriculture water demand model (AWDM) would be integral to this project.

The Province partnered with Agriculture and Agri-Food Canada to develop the AWDM prior to the start of the Okanagan Water Basin Water Supply and Demand study. The intent was to have a tool that could determine agriculture’s requirements and provide this information to the larger study and other users in the Okanagan.

“The agriculture statistics on present use and future water needs were crucial facts to be included in the overall area study,” said Anna Sears, executive director of the Okanagan Basin Water Board. “The ultimate goal of the project is to be able to establish better systems to track natural water flows, establish water-use patterns, and estimate how these will change in the future.”

The AWDM project took over three years to complete and had 35 different staff, contractors and consultants working on various phases of the project. Agriculture and Agri-Food Canada provided $249,000 in Canada-British Columbia Water Supply Expansion Program funding and an estimated $250,000 of in-kind support was received from various organizations.

Since completion of the AWDM for the Okanagan the model has been expanded for use in the Nicola, Similkameen, Bonaparte and Salmon River watersheds. Land-use data is being collected in the Kettle Valley and Metro Vancouver to expand the use of the model in these regions in 2010.

The Okanagan Water Basin Board announced the full Okanagan Water Supply and Demand Study on Friday, March 26, 2010. The AWDM is a significant part of that study.