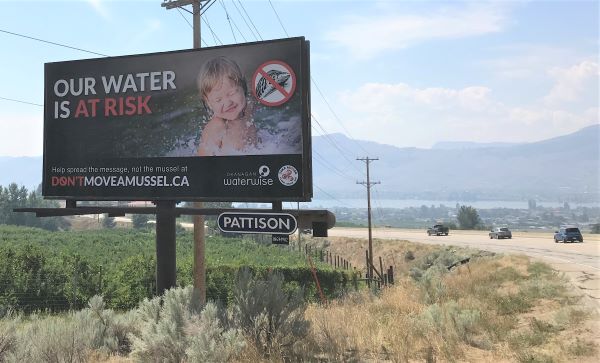 Kelowna, B.C. – With a new federal fisheries minister from B.C. and some recent positive steps forward in addressing zebra and quagga mussels, the Okanagan Basin Water Board is once again urging the federal government to push on and help prevent the westward spread of invasive mussels. This, especially as the weather warms and the Okanagan prepares for another busy tourist season on valley lakes.

The OBWB has sent a letter to Joyce Murray, Minister of Fisheries, Oceans and the Canadian Coast Guard, calling for a renewal of multi-year federal funding, which is due to expire in 2023, for invasive mussel outreach and education and lake monitoring.

“We’re happy to see a fisheries minister appointed from B.C. and hope she has a good understanding of water issues in the Okanagan and around the province,” said Sue McKortoff, Chair of the Water Board (OBWB). Reviewing B.C. inspection stats from last year, McKortoff insists that invasive mussel prevention requires federal support.

The mussels are currently in Quebec, Ontario and Manitoba, and there have been several close calls with mussel-infested watercraft being intercepted coming into B.C., Alberta and Saskatchewan. Last year alone, B.C.’s inspection stations intercepted 17 mussel-fouled watercraft, eight of which were headed to the Okanagan. Of these 17, the greatest number – seven – came from Ontario, two came from Manitoba and 1 from Quebec, the other seven came from various U.S. states.

“The OBWB, through its Okanagan WaterWise program, has been delivering the ‘Don’t Move A Mussel’ program since 2013. We have also been funding the Okanagan and Similkameen Invasive Species Society (OASISS) to extend this outreach. As a result, awareness in the Okanagan regarding these mussels is very high, but we have no authority outside our region, so provincial and federal support is absolutely necessary,” McKortoff added.

In its letter, the OBWB acknowledges DFO efforts to work with the Province of Manitoba to contain the mussels and work with Canada Border Services Agency to improve enforcement of Aquatic Invasive Species (AIS) regulations at international borders. But it also notes correspondence from DFO that states provinces may authorize the release of deleterious substances (i.e. pesticides) to prevent, control or eradicate AIS. “While this is an important tool for provincial governments to have in limited cases, it is not an effective tool to address invasive mussels in larger waterbodies which are hydrologically connected to large river systems – like we have in the Okanagan,” the letter states. In addition, the letter notes, Okanagan lakes are a source of drinking water and past experience with chemical treatment of invasive milfoil in the 1970s has shown “there is no social licence for this method in our local communities.”

“This is not a practical solution for the Okanagan and most other regions of B.C.,” added McKortoff, noting that prevention is Western Canada’s best defense. “We recognize that we each have a role in keeping zebra and quagga mussels out – as individuals, as local and regional areas, but that we need provincial and federal government support. That’s the only way we will be able to keep our waters safe.”

A 2013 OBWB study found the cost of an infestation to the Okanagan would be at least $42 mill. annually to manage, recognizing the impact on fisheries, tourism, aquatic infrastructure, and more. In response, the OBWB-OkWaterWise launched its Don’t Move A Mussel (DMM) campaign, valued between 2013 and 2021 at more than $996,000. It has also provided another $266,000 over that time to OASISS to extend the reach of DMM, conduct direct boater outreach and more.