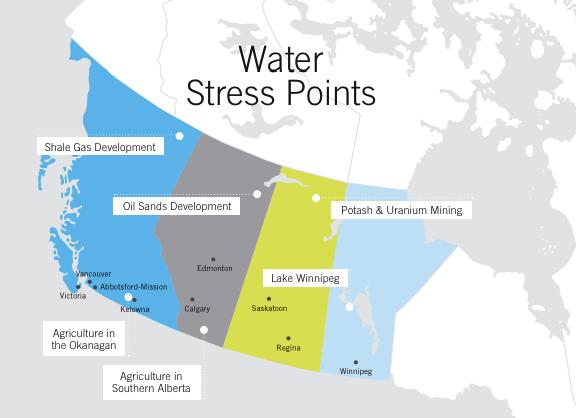 A new publication released by the Canada West Foundation outlines a series of water challenges, or “stress points,” emerging in western Canada.

Stress Points: An Overview of Water and Economic Growth in Western Canada  highlights some of the current water challenges and their potential impact on the economy, the environment, and society. It also examines policy dilemmas that are hindering progress in addressing these challenges.

“Water stress points in the West range from Lake Winnipeg in Manitoba and potash and uranium mining in Saskatchewan to agriculture in southern Alberta and shale gas development in northern BC,” explains author Larissa Sommerfeld in a recent press release. “Each province has unique issues and challenges, and we need to ensure that protecting our water is a priority—it’s simply too important to put off for later.”

The Canadian West Foundation reports that they plan to release a series of similar papers throughout 2012, with the goal of ensuring that western Canadian “circumstances, expertise, and innovation inform the national debate on the future of Canadian water policy and economic growth,” according the release.

This report is part of the Canada West Foundation’s The Living West Initiative.

City of Ottawa Releases Plan to Clean Up River