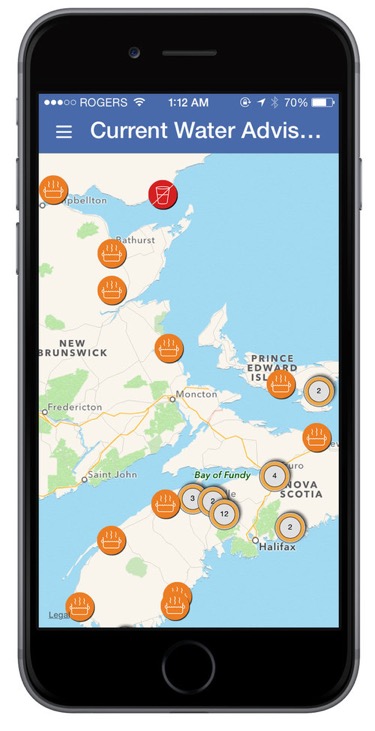 On any given day, there are about 1,600 drinking water advisories posted in Canada. A new mobile app designed by the Lake Ontario WaterKeeper, using research data from Water Today, provides up-to-the-day information on Boil Water, Do Not Consume, Water Shortage, and Cyanobacteria (Blue-Green Algae) water advisories across Canada.

“There is no effective, standardized protocol for issuing drinking water advisories across Canada that uses 21st Century technology. Messages are sent to the media, but they can be easy to miss,” said Krystyn Tully, Vice President at Lake Ontario Waterkeeper.  “Some of the water advisories have been in place for years, and they tend to be seen as ‘old news’. We wanted a way for people to see all advisories across the country, to get a sense if the scale of the problem, as well as subscribe directly to alerts in their home town.”

Water advisories are typically caused by overflowing riverbanks, excessive E. coli, viruses or bacteria entering the water system and inadequate filtration or disinfection during treatment, re-contamination during distribution. Rural areas, smaller municipal systems, and First Nations communities are more likely to be affected by drinking water advisories than major urban centres. However, with aging infrastructure, contamination upon transmission is a growing concern.

“The number of First Nations communities and reserves under advisory is shocking. These areas are disproportionately affected.” Tully said that in August, much of the map from Alberta to Manitoba was peppered with the cyanobacteria alerts.

Due to the changing nature of such advisories, WaterToday.ca, an Ottawa-based organization, began posting Canadian water advisory information on its website in 2006. Watertoday.ca monitors media releases and checks the provincial and municipal water advisory sources on a daily basis to generate the data. “The researchers at Water Today are the only people in the country who have that information updated every single day. We had the app technology, courtesy of our first effort, Swim Guide. It seemed like the perfect fit,” said Tully.

The Waterkeeper’s Drink Guide app makes this data available to iPhone users so that Canadian can receive alerts about drinking water advisories where they live.  The new Drink Guide app builds on the success of the Swim Guide app. developed in 2012 that provides users up-to-date information on the beaches that are safe for swimming.