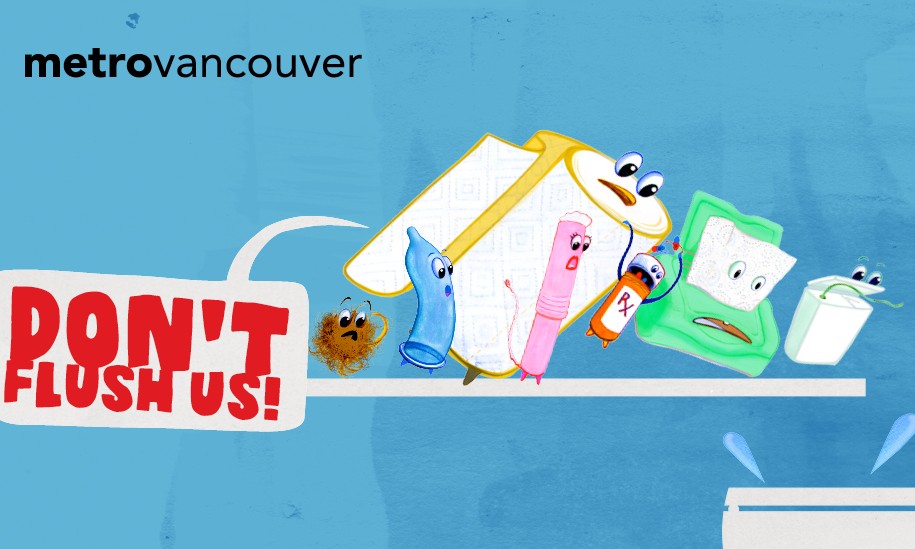 Metro Vancouver is rolling out a new campaign, The Unflushables, in hopes of educating residents to stop dumping items down the drain that clog the municipal and regional sewer system. This is a national problem and the cost of dealing with this issue across Canada has been estimated at $250 million.

The 2017 Unflushables campaign, which launched yesterday, will focus on the worst offenders for clogged drains, such as wipes, paper towels, dental floss, hair, tampons and applicators, and condoms, as well as medications.

“You wouldn’t believe some of the items that people flush, but it’s the everyday objects that people often don’t think about that can cause the biggest problems,” said Metro Vancouver Utilities chair Darrell Mussatto. “It costs us hundreds of thousands of dollars to deal with clogs, damage to equipment, sewage overflows and environmental impacts as a result of these things ending up in our wastewater infrastructure.”

Besides items that typically clog drains and sewers, medications will also have a prominent role in this year’s campaign.

“Although they aren’t responsible for clogging our infrastructure, medications are another item that our residents need to be conscious about,” said director Mussatto. “Flushing medications is problematic as it is difficult for wastewater treatment systems to fully remove them and they may end up in the aquatic environment. The province has mandated a producer-led scheme for managing medications so they don’t end up in our waterways and landfills. Unused and expired medications should be disposed of properly at a local pharmacy.”

There is no regulatory standard to define what is flushable, and Canadian municipalities are estimated to spend $250 million each year dealing with unflushable items that affect wastewater infrastructure. Costs at Metro Vancouver are estimated to be at least $100,000 annually to de-clog regional pump stations, and with hundreds of thousands on top of that to replace damaged equipment.

Residents of Metro Vancouver can find out more about The Unflushables campaign and the correct way to dispose of the targeted items at unflushables.ca.

Earlier this week, the Ontairo Onsite Water Association made a statement about flushable and unflushable objects.