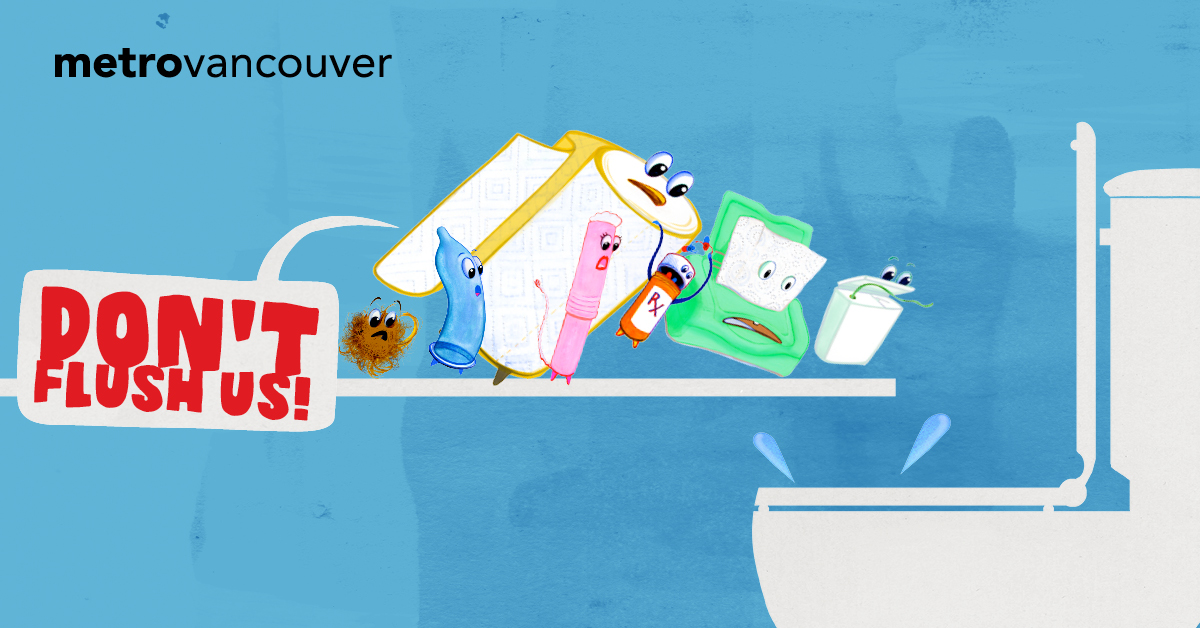 Metro Vancouver launched its third annual Unflushables campaign. The campaign reminds residents not to flush wipes and other items like hair, floss, and tampons down their toilets because they can clog the sewer system and damage pumping equipment. This year’s campaign focuses on wipe products, which are often misleadingly marketed as ‘flushable.’

Initial findings from tests at Ryerson University found that only 11 of 101 products met the ‘flushable’ specifications developed by the International Water Services Flushability Group (IWSFG) – and all of those were normal toilet paper.

Every wipe brand tested failed the flushability or disintegration test, as the wipes remained intact even after 30 minutes inside a ‘slosh box,’ which means they are likely to cause clogs at homes or throughout the wastewater system, including pumps, pipes and other infrastructure. A limited number of products also showed they contained synthetic fibres that could result in the release of microplastics into the ocean.

“It’s important for residents to understand that disposing of unflushable items in the toilet may cause clogs on residential property and result in costly repairs at the owner’s expense,” said Richard Stewart, chair of Metro Vancouver’s Utilities Committee. “Even though many wipe products are labelled ‘flushable,’ residents should be throwing them in the trash, not the toilet.”

The Ryerson findings support efforts by the Municipal Enforcement Sewer Use Group (MESUG) and the Canadian Water and Wastewater Association to establish a Canadian specification and/or a requirement for all products labelled as ‘flushable.’ Metro Vancouver contributed $10,000 to the development of this specification and the testing by Ryerson University. Ryerson will be releasing the full results of its testing on April 4.

Besides wipes, Metro Vancouver’s campaign highlights the damage other unflushables can cause to the sewer system. The worst offenders include dental floss, hair, paper towels, tampons and applicators, and condoms. Also on the list of “unflushables” are medications, which may end up in our environment. Medications should be returned to your local pharmacy for proper disposal through the provincial medications return program.