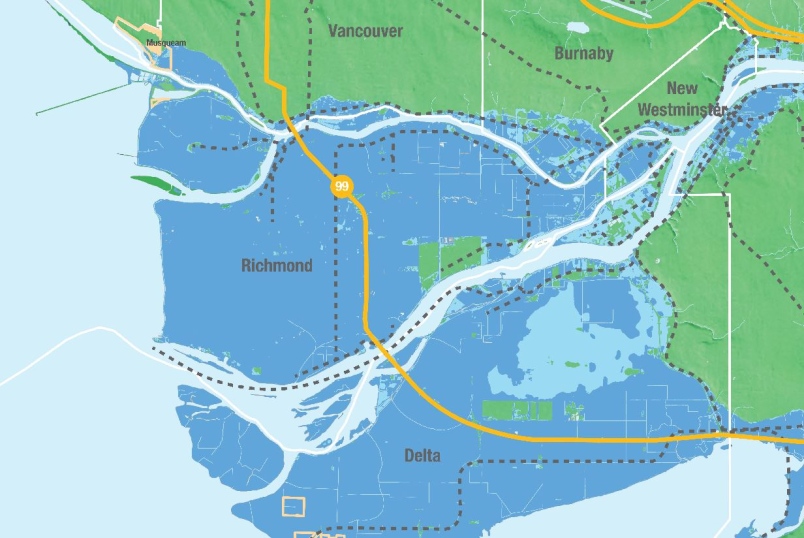 New studies out today show there’s a growing risk of a large-magnitude flood in British Columbia’s Lower Mainland, and that if a major Fraser River or coastal flood were to occur between now and 2100, it would trigger losses estimated at $20 to 30 billion—and become the most costly natural disaster in Canadian history.

The Fraser Basin Council (FBC) have been working the past two years to analyze Lower Mainland flood scenarios. They have completed phase 1 and are now working on phase 2 of the Lower Mainland Flood Strategy).

Phase 1 involved review of flood scenarios that threatened Lower Mainland, along with flood vulnerabilities, protective work and practices. Phase 2 is anticipated to be finished by 2018 and will focus on emerging the Regional Flood Management Strategy and options for funding.

After review of future flood scenarios, FBC concluded that Richmond and cities upstream are at major risk of flooding if significant mitigation efforts are not put in place.

As sea levels continue to rise and run-offs become more intense, flood risks are increasing, the study demonstrated the potential for the most expensive natural disaster in Canadian history.

In the case of a major river flood caused by spring freshet, high tides, and sea level rises, a flood like this would cause an estimated $18.4 billion in building losses, $7.7 billion in cargo shipment interruptions, $5 billion in infrastructure loses and $1.6 billion in agriculture losses.

Steve Litke, senior program manager of the Fraser Basin Council, said they are trying to develop a strategy with various jurisdictions that have flood management roles, so they are the end users and the partners to develop that strategy.

The next and most important phase of work is to review a wide range of flood management options across different local circumstances in the Lower Mainland of British Columbia. It is a mix of strengthening existing management coaches such as diking systems and also looking to emerge innovative approaches so there is some interest in the region to look at green shores.

“We now have a crisper picture of the evolving flood risk faced by the Lower Mainland and the chilling economic cost of inaction,” said Colin Hansen, chair of the council. “It’s time to kick into high gear, have all partners determine the best flood protection for the region, and roll out an action plan. We’re pleased that the Province of B.C. is showing strong leadership to support this work.”

Steve Litke said he wants to emphasize the collaborative approach that is in place. With 43 funding partners and many others contributing expertise and data, all of the local governments, numerous other agencies and public and private sector organizations, this project is very unique. “We will come up with common vision on what is needed then move to implementation.”