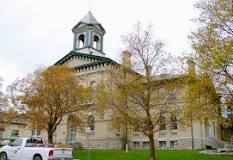 Kawartha Lakes residents and businesses celebrated the completion of the North West Trunk Project on June 25. With funding from the governments of Canada, Ontario, and the City of Kawartha Lakes, the project is expected to create long-term sewer and water capacity for growth in Lindsay’s west end.

The Governments of Ontario and Canada each contributed $1.66 million to the project, while Kawartha Lakes added $2.5 million towards the total project cost of $19.8 million. The remaining $14.2 will be paid for by the developers who will create growth in the area.

The project included the construction of the new Jennings Creek Pump Station in Lindsay’s North West quadrant, and new gravity sewers. Two forcemains were also installed from the new pumping station to the Lindsay wastewater treatment plant, and the Uniroyal Pump Station was decommissioned.

“Our government is modernizing critical infrastructure across the province to improve the quality of life of residents in rural communities,” said Minister of Agriculture, Food and Rural Affairs Jeff Leal. “The investment made to complete the Kawartha Lakes North West Trunk Project marks our commitment to strengthening and providing clean water for residents and businesses of Kawartha Lakes.”