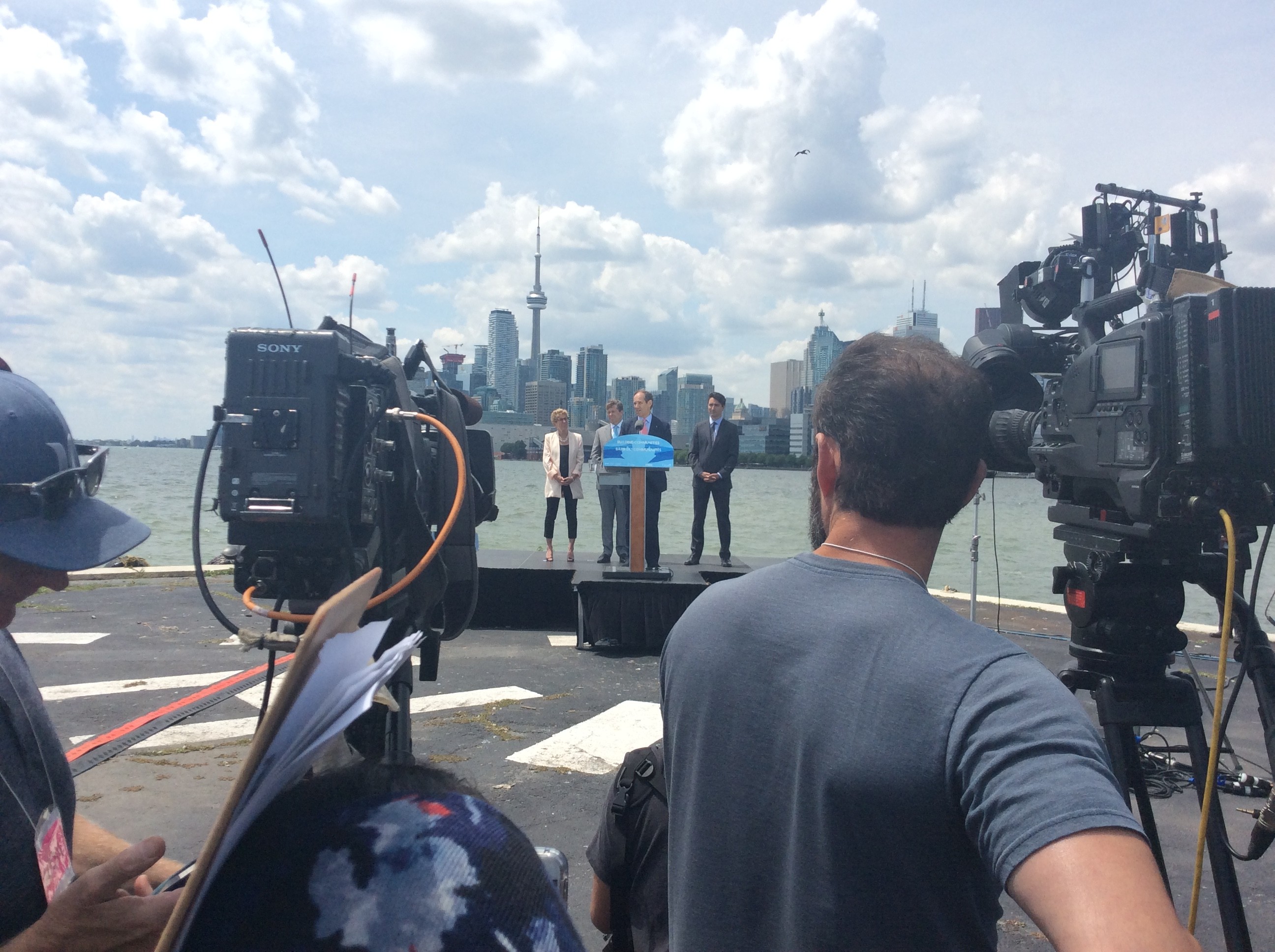 With the waves nearly cresting the concrete dock, Prime Minister Justin Trudeau, Premier Kathleen Wynne, Toronto Mayor John Tory, and Waterfront Toronto CEO Will Fleissig came together at the Toronto Portlands to announce a $1.2 billion commitment to the area.

Through the Toronto Port Lands Flood Protection project, the governments of Canada, Ontario, and Toronto have pledged support to ensure climate resilience, economic growth, spur innovation, create jobs, and improve water quality both in the Don River and Lake Ontario.

The Don Mouth Naturalization and Port Lands Flood Protection Project (DMNP) is a precedent-setting undertaking aimed at revitalizing the mouth of the Don River. The DMNP will ultimately transform the existing mouth of the Don River, including the Keating Channel, into a healthier, more naturalized river outlet, while simultaneously providing critical flood protection to 240 hectares of Toronto’s eastern waterfront. It will also remediate and transform the underused industrial area into a residential neighbourhood.

Premier Wynne said, “Together, through Waterfront Toronto, we’re leading the way in creating vibrant new neighbourhoods in unused stretches of our beautiful waterfont. It does makes me sad to meet people who haven’t really experienced that waterfront and don’t know how to access it, but the work that we are doing today is another step in opening it up, not just for the people who live close by […] so people understand that it belongs to all of us.”

Premier Wynne added, “Our combined investment of $1.2 billion investment over seven years will clean up the Port Lands, protect this site, and allow for a new future for this area. […] We’re not just talking about a project that is important to Toronto; it’s important to this country, and this lake—the Great Lakes—that we get this right.”

Mayor John Tory said, “The construction alone, has the potential to provide profound benefits. A 2016 study says that spending on just the design and construction of this project will generate approximately $1.1 billion in value to the Canadian economy; thousand of jobs and hundreds of millions of dollars in tax revenue to order of government that will in term be used to address the needs of residents.”

“Working on flood protection will improve the city’s resilience, a priority for the city and our new resiliency officer,” he added.