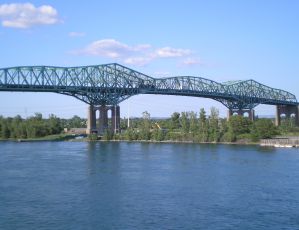 The Government of Canada will be investing just over $5 million for the restoration of an interior marshland on Île Lapierre in the borough of Rivière-des-Prairies-Pointe-aux-Trembles to compensate for the loss of natural areas following construction of the new Champlain Bridge.

The project will recreate the historic 1.5 hectare marsh that will also support spawning, fry rearing and feeding of fish, in addition to generating habitats that support other species such as birds. This project will be carried out in accordance with the DFO Fisheries Act Wetland Policy.

“This wildlife management project on Île Lapierre-a major investment by the Government of Canada-will in the medium term lead to the opening of a new sector of the Ruisseau-De Montigny Nature Park: Île Lapierre, a magnificent but currently inaccessible site,” said Denis Coderre, mayor of Montreal. “Our objective in the near future is to look at developing recreational facilities to give Montrealers an additional access to the waterfront and views of Rivière-des-Prairies.”

Infrastructure Canada has worked closely with the City of Montreal, Fisheries and Oceans Canada, Environment and Climate Change Canada, Public Works and Government Services Canada, and Ducks Unlimited Canada to set up the Île Lapierre project which, in addition to providing numerous environmental benefits, will enable Montrealers to enjoy the site.

“It is critical that development projects be analyzed using a so-called mitigation sequence, which aims to first prevent disturbance to any wetlands, then reduce the anticipated project impacts and, if that is not possible, offset losses by restoring and creating new wetlands,” said Bernard Filion, Quebec Director, Ducks Unlimited Canada. “This is precisely the approach that Infrastructure Canada has taken, and we applaud it. Ducks Unlimited is proud to lend its expertise to Infrastructure Canada for this marsh development project on Île Lapierre, which fits into this approach.”