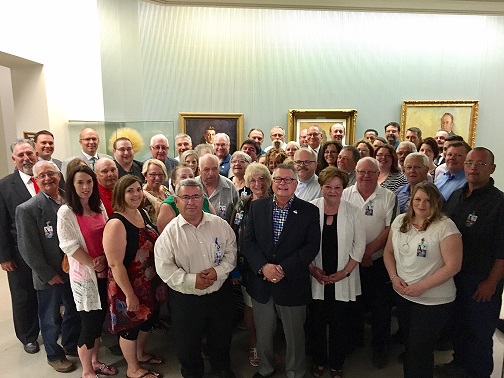 On June 2nd, the governments of Canada and Saskatchewan announced funding for 75 new water and wastewater projects throughout the province.

This investment represents combined federal, provincial, and local partner funding of more than $94 million for 74 Clean Water and Wastewater Fund (CWWF) projects, and one project under the Provincial-Territorial Infrastructure Component – National and Regional Projects.

“The investments in infrastructure we are making will benefit Canadians for years to come – creating economic growth and middle – class jobs now, while laying the foundation for sustainable growth in the future,” said Goodale.  “These water and wastewater projects will protect the environment and help keep our Saskatchewan communities healthy for generations to come.”

Goodale and Harpauer are pictured center and right of center.

“The City of Moose Jaw is very appreciative to receive this funding from the federal and provincial governments, as it will support water and sewer infrastructure related to a new industrial park for our community that will add vibrancy to our city’s economy,” City of Moose Jaw Mayor Fraser Tolmie said.