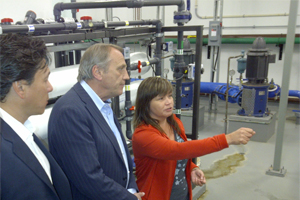 Speculations that the Harper government might revive its bill for clean water for First Nations have proven correct. Aboriginal Affairs Minister John Duncan made the announcement yesterday in Calgary.

“At the recent Crown-First Nations Gathering, First Nations and our Government committed to working together to support strong, healthy First Nation communities,” said Minister Duncan. “The Safe Drinking Water for First Nations Act is a key milestone in making this a reality and a vital step towards ensuring First Nations have the same health and safety protections for drinking water in their communities as other Canadians.”

“First Nations will be able to look forward to having the same protections that other Canadians have around the provision of drinking water, water quality standards and the disposal of wastewater in their communities. This is not only an important health and safety issue, but will help build confidence in our infrastructure and help create a better climate for investment,” added Chief Lawrence Paul of Millbrook First Nation and Atlantic Policy Congress of First Nation Chiefs Secretariat Co-Chair (Nova Scotia).

However, not everybody feels as confident in the process. When the bill was first announced in May 2010, several parties came forward with concerns about associated funding, standards, and labour capacity gaps. They also indicated concern about how management and consultation.

In an article in the Calgary Herald, Treaty 7 Grand Chief Charles Weaselhead cautioned that without funding for infrastructure and staff training, the act may prove to be impotent against the challenge of improving water standards on reserves. “It’s a good first step,” Weaselhead said. “But regulations without capacity and financial resources to support them will only set up First Nations to fail.”

While provinces and territories each have their own safe drinking water standards, there are currently no legally enforceable standards and protocols governing water quality on First Nation lands.